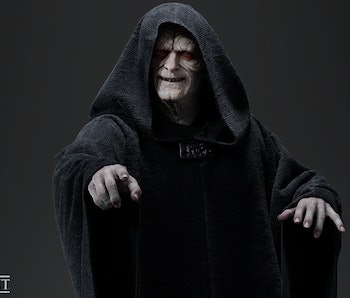 The Star Wars saga is epic in scope, but it’s also predicated upon some pretty petty backstabbing political maneuvers and evil scheming. The Machiavellian villain behind it all is Sheev Palpatine, the smiling senator from Naboo who becomes a decrepit Sith Lord and destroys anybody who gets in his way on his path to power. He’s a classic supervillain pulling all the strings, first as a politician with a public persona and then as a blatantly evil despot hermit out for complete control of the galaxy. But how did he manage to do all that?

Here’s a quick refresher on the ploys Palpatine pulled that almost let him rule the galaxy forever.

Calling For a Vote of No Confidence in Chancellor Valorum

Young(er) Mr. Palpatine is, weirdly enough, actually the most important character in The Phantom Menace. His long con begins in the derided prequel-starter. Like far too many politicians, he seems cheery and devoted to his constituents (that he represents), but he’s really just out to cause a ruckus and enrich himself. He’s got Darth Maul bugging Qui-Gon and Obi-Wan on Tatooine, while also making life miserable for the citizens of Naboo while working in cahoots with the Trade Federation.

The Phantom Menace gets hopelessly bogged down in political mechanics, but the gist is that Palpatine uses the Republic’s lack of response to the Trade Federation blockade of Naboo to force Queen Amidala to call for a vote of no confidence on Chancellor Valorum in the Senate. Its the first domino he needs to fall so he can be democratically elected as Valorum’s successor.

Playing the Separatists and Republic Against One Another

When Attack of the Clones rolls around, Palpatine is sitting pretty as the Supreme Chancellor of the Galactic Republic, but this time he has to deal with a pesky coalition of a few thousand planetary systems that have threaten to secede. The Separatists are lead by a religious fanatic named Count Dooku. The trick here: Palpatine and Dooku are really Sith buddies, steering both sides of the conflict toward war.

Under the guise of Darth Sidious, Palpatine has Dooku rally the Separatists to build a droid army to challenge the Republic, which allows Palpatine to rally the Republican system representatives into building their own clone army. Palpatine’s plan to gradually chip away at democracy holding the galaxy together was a long con: He commissioned the clone army a decade ago under mysterious circumstances for a big droid battle that threatens to topple the Republic, making him look like a hero in the eyes of his constituency.

Making Anakin a Member of the Jedi Council

Once Palpatine has the Republican systems in his grasp, the only other force standing in his way is the vaunted Jedi Order, the Republic police enforce the rules and make nasty systems like the Trade Federation play nice. Mace Windu and the Jedi Council squad should have searched their feelings to figure out that something was fishy with Palpatine, especially after he appointed the fiery angsty teen Anakin Skywalker to the Jedi Council in Revenge of the Sith despite him not being a Jedi Master.

Palpatine knew that the Council was wary of Anakin, who was supposedly prophesized as the one who would bring balance to the Force. He took advantage of Anakin’s spoiled brat mentality to plant the idea that the Jedi Council are a bunch of telepathic bullies out to deny him his right place as the One. This single-handedly disrupts Palpatine’s main bureaucratic obstacle, which all but guarantees his ascendancy to the Emperorship.

Years after he manipulates Anakin into accepting the title of Darth Vader and pulls the galaxy under his complete control, Palpatine figures the most rational way to keep his galactic subjects in line is to build a huge planet-destroying battle station. It is the big, deadly embodiment of his effort to shift power from planet-wide representatives to weaker regional governors as a way to make sure no one can oppose him. This big death machine is of particular offense to the Rebel Alliance, which does not take kindly to a crusty old senator blowing up whole planets on a whim.

But Palpatine doesn’t stop at that setback. He finds out the Rebels are gradually gaining power against him and that the jerk who blew up his Death Star is probably Darth Vader’s kid, and springs back into action. So by the time Return of the Jedi rolls around, the master manipulator uses his limited resources to spring a supposed trap for the Rebels and Luke Skywalker on the second Death Star.

He goads Vader into thinking that Luke should be turned to the Dark Side, eventually leveraging Luke’s feelings about his Rebel friends fighting over Endor while pitting father against son at the same time. Palpatine essentially tries to win the ultimate fight with both a big space battle and father-son showdown that is guaranteed to kill one and weaken the other. But, after six movies and way too much conniving, his best-laid plans finally unravel.

More like this
Entertainment
7.2.2022 4:00 PM
Next Exit is the existential road trip sci-fi fans need — here's why
By Eric Francisco
Entertainment
6.29.2022 10:30 AM
25 years ago, Nic Cage made his most explosive sci-fi movie ever — it was almost even better
By Jake Kleinman
Culture
7.3.2022 11:30 AM
15 years ago, Michael Bay made the most overrated sci-fi movie of the century
By Andrea Thompson
Related Tags
Share: