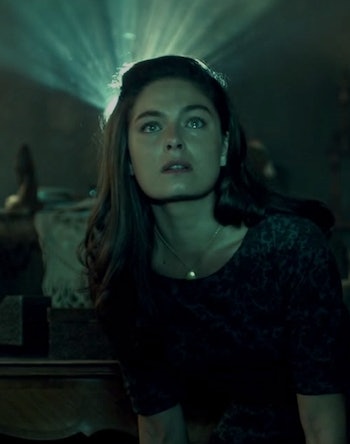 There’s a lot to be excited for in the next season of The Man in the High Castle. The show, based on the Philip K. Dick novel, might be a bit more daunting this time around, given the 2016 election results and ensuing Neo-Nazi emboldenment, but that makes it even more of a powerful cautionary tale than before.

The Man in the High Castle is all about what happens when groups of people rebel against complacency in hopes of a better world — in this case, a better world revealed through alternate universe reels and visits to other realities. The first season established and grew the main characters into heroes of the rebellion, while others faced the music of going along with evil empires for the sake of personal and professional safety. This season, our heroes are faced with even more obstacles than before in pursuit of the truth, and the villains continue to face their own inner demons. Here are just a few things to look forward to this season — most importantly, the big reveal of the man they’re all there for.

1. The Man in the High Castle is revealed (spoilers: it’s not Hitler).

After plenty of speculation as to who the Man in the High Castle would be, including possibly Adolf Hitler himself, Amazon has revealed him to be, well, some guy played by Stephen Root. The titular Man in the High Castle played a vital role in the first season, even if audiences never saw his face. In this season, Julianna Crain takes more drastic measures to track him down. During her time with the Man, Julianna learns more about the tapes and what they represent. It looks like they show just about every reality possible, not just ours and the show’s. This could mean The Man in the High Castle is going with a multiverse theory, parallel dimensions … or something else entirely.

2. There’s a new resistance leader, and a Nazi party girl.

There are other new faces joining The Man in the High Castle this season. The first is Gary Connell, a former criminal who emerges as a cutthroat leader of the West Coast Resistance Movement. Then there’s a Berlin-born filmmaker named Nicole Becker, who’s been described as a second-generation Nazi — someone who cares more about her movies and partying than she does the Third Reich. Nicole’s role hints at a changing mood in Nazi Germany, which is set to have some sort of rebellion this season.

The first season showed images of nuclear war, and it looks like something that The Man in the High Castle’s heroes could also face. According to a panel at San Diego Comic-Con, Germany and Japan will engage in a sort of cold war this season, meaning they both have the capability to destroy the other (and the entire world as a result). No clue who’s going to come out victorious, but it’s already clear that Nazi Germany would rather control the entire United States territory, instead of splitting it with Japan. They’ve gone to pretty drastic measure to try and make that happen. This season it could work.

4. Joe’s father comes into the picture, and he’s a big deal.

All through the first season of The Man in the High Castle, Joe Blake’s father was a constant presence in his life, even if he was never on screen. According to those around him, Joe’s father was a “high-ranking officer,” and that awarded Joe a lot of advantages in life. Of course, that meant speculation that Joe was the bastard son of Hitler, but (again) that’s not true. Joe’s father is actually a man named Martin Hausmann, played by Sebastian Roche.

It looks like Joe’s father, described as one of the most powerful men in the Third Reich, wants to come back into his son’s life this season, though he simultaneously won’t bat an eye at mass extermination in order to achieve Nazi goals. It’s not known if Joe’s going to want him around. Early peeks show Joe reaping the benefits of being a member of the Nazi Empire, but seeds of doubt continue to sow, and we may see him rebel or defect by the end of the season.

5. Julianna defects to the Nazis.

It’s not certain how bad things get for Julianna at the beginning of the season, but considering she’s going to seek asylum with the German side of the United States, she must be in pretty dire straights. One of the first scenes Amazon shared was Julianna’s interrogation at the hands of Nazi officer John Smith, after requesting temporary asylum to escape Japanese forces and members of the Resistance. It’s still uncertain why she’s defecting, but it could be related to the fact that she comes across the titular Man in the High Castle. In an early peek, she’s on the run because she’s seen “his face.”

6. John Smith’s son (and his disability) will play a bigger role.

Last season, audiences didn’t really get to explore the story of John Smith’s son, Thomas, except when it was discovered that he has a congenital disease that will eventually paralyze him. In the Third Reich, that pretty much means he should be executed, but his father John Smith has kept it a secret. One of the early scenes Amazon shared for the upcoming season was Thomas Smith going to school and leading the class in a pledge for Adolf Hitler. It looks like Thomas is going to play a bigger role this season, showing how Nazism is impacting schools. This also means Thomas’ secret disease could become more of an issue. There are also indications that John Smith’s marriage is in trouble, possibly because John Smith is conflicted over his decision to keep his son alive, even if it goes against his sworn duty.

7. Tagomi will discover more about the alternate world he visited.

At San Diego Comic-Con, it was confirmed that Tagomi did not dream that he was in our reality, he did in fact visit it. This season, Tagomi will further explore the vision he saw and its ramifications. He’ll also further connect Julianna to everything that’s been happening, which could lead to her running away to the Nazi side of the country for her own safety.

The Man in the High Castle returns for Season 2 on December 16 with 10 episodes.