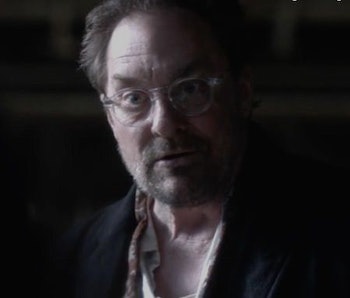 Most of the characters in Amazon’s alternate reality series The Man in the High Castle, adapted from author Philip K. Dick’s 1963 novel, spent most of the first season trying to figure out who the unseen man in the title actually is. In Season 2 it looks like we’re definitely going to find out.

In a new glimpse at the second season, the lead character Juliana Crane actually meets the still unnamed man of the title (played by Stephen Root), who fills her in on the seemingly endless alternate realities in the films and newreels he and the Resistance are amassing to fight the Axis powers.

The first season of the show, which posits a world where the Axis powers won World War II, had Juliana come into the possession of a film called The Grasshopper Lies Heavy. It pulls her into the underground anti-Axis Resistance, supposedly lead by the man of the title, who is amassing footage that supposedly shows an alternate reality where the U.S. and the Allies won the war.

The still mysterious implication is that if people see these films it might somehow change the course of history.

There’s not much to go on in the extremely brief (probably too brief) clip, but its surprising that Juliana actually meets Root’s titular character presumably so early on in the new episodes instead of it being some kind of climactic moment. Dick’s book is wildly different from the show beyond the basic premise and some character names, so it might not be worth comparing the two. But characters in the book do meet the the author of The Grasshopper Lies Heavy, a man named Hawthorne Abendsen, who is still absent from the show. They also meet the titular man in the high castle towards the end of the book as well.

We’ll have to wait to see how it all fits together when The Man in the High Castle drops on Amazon December 16.

More like this
Entertainment
8.9.2022 1:00 PM
Has your favorite HBO Max show been canceled? The fate of 9 sci-fi series revealed
By Robin Bea
Entertainment
7.27.2022 4:15 PM
Everything we know about Rick and Morty Season 6
By Corey Plante
Entertainment
7.29.2022 3:00 PM
Amazon’s Paper Girls is the best new time-travel TV show since Dark
By Mónica Marie Zorrilla
Related Tags
Share: