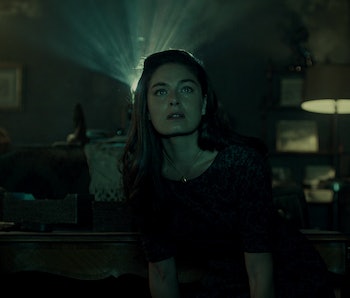 It is hard to adapt Philip K. Dick for film or TV. Many have argued — rightfully so — that Ridley Scott’s 1982 sci-fi classic Blade Runner is the only time it has been done successfully. Those who have been hoping, for the year-plus that’s elapsed since the pilot debuted during the first Amazon “pilot season,” that the Scott-produced series based on Dick’s 1962 classic of speculative fiction, The Man in the High Castle, would be the exception to the rule, will be disappointed. The pilot felt a bit stagey, but packed in enough of the crazy world to feel like a promising prospect.

While it is a head or two above most film adaptations of the author’s work — from Paycheck to Total Recall to even the just-OK Spielberg Minority Report — the final series fails to solve the problem that all adaptations tend to have: figuring out how to externalize and reshape his eccentric and colorful prose to the language of film.

Philip K. Dick’s fiction should be a filmmaker or showrunner’s dream. His books and stories are overstuffed with strong and unique concepts, and even among his catalogue, relatively little gets better than The Man in the High Castle. The novel establishes a thorough and wonderfully hare-brained alternate history in which the Allies lost World War II, and the world is divided between Germany and Japan. However, the two Axis powers’ fragile alliance is liable to rupture at any time, and a clandestine resistance movement is gaining strength. There’s a weird cottage industry of pre-war American artifacts — from Colt 45s to Mickey Mouse watches. Most Nazi households look very similar to ‘50s Levittown, except their kids wear swastika armbands. There are hints of unique technological advances, that push gently toward the sci-fi qualification without fully going there.

And yet, the rich tension of this world can only be superficially translation, mostly into B-grade computerized special effects that don’t get anywhere near capturing Dick’s run-on, almost hallucinatory descriptions of the scenery. That’s because these descriptions usually occur in his character’s internal monologues, and possess a neurotic, free-flowing quality that’s hard to channel directly in the linear, narrative format of a standard-issue TV show or film.

Still, it feels like Amazon’s The Man in the High Castle could have found more of a way without too much trouble. The setting is not even realized compellingly. Visually, the world of Japanese-dominated San Francisco, where much of the action takes place, is drab, shadowy, mostly dark green and distinctly unvaried. The show doesn’t take any chances at making itself interesting to look at.

Also, these episodes don’t take us inside the characters’ heads — ever — to explore their pre-war or wartime realities. The events that have shaped the current shape of their empty, often subservient lives are left out. Watching their emptiness feels empty, but not in the intended way. It leaves us feeling little sympathy for their respective plights, or understanding of their motivation. Much of the time, the stakes for any conflict feel deathly low. Flashbacks can be a disaster in television (remember that show Mad Men?), but full scenes taking place in the past could have worked well here. Only the allusions to the shadowy past of Nazi Obergruppenführer John Smith in New York, played by an ominous and wonderfully controlled Rufus Sewell, are of clear interest.

As it is, most of these characters come off like ciphers. By rendering them only in the present tense of the story and relying on relevant succinct, non-descript dialogue, the writers give us very little sense of who they are outside of what they directly facilitate in the plot. This is most glaring, unfortunately, in the case of two of the show’s main characters — judo-student-cum-revolutionary Juliana Crane (Angel/Clash of the Titans’ Alexa Davalos) and undercover Nazi resistance agent Joe Blake (primarily, Elliot from Gossip Girl). The impetuses behind their actions remain obscure in a way that takes away from the show’s drama rather than enhance it. We see Crane embrace the mission of her murdered activist sister — transporting a film, made by unidentified artiste “Man in the High Castle,” which shows a utopian vision of America with the Allies in power — without knowing exactly why she’s so determined. She’s curious, and unbelievably trusting of those — like Joe — who volunteer to help her.

Crane’s on-and-off boyfriend and plant worker Frank (relatively unknown British actor Rupert Evans) is more commanding on-screen, and coherent as a character. However, this is partially because he suffers a great tragedy at the hands of the Japanese government, which more-than-clearly justifies his rash and heavy mood swings. His performance is full of humanity, because he’s not left with much that’s interesting in terms of lines or scenarios — his performance is all reactive.

Dialogue was never Dick’s strong suit — it is the fragmented narration, and the phantasmagoria of eccentric mental landscapes we got in other parts of the prose that make his stories so indelible. Especially in his earlier work, his lines read sometimes like sub-Hammett and Chandler noir dialogue imported to a sci-fi setting. Castle showrunner/writer Frank Spotnitz — of X-Files fame — and his team of writers have translated the scenarios in the book to the most basic of terms. When they are altered, it is to make the stories in the book intersect more logically. One of the results of this “faithful” approach is that these teleplays are full of unsubtle, stock dramatic lines. Of course, banter was never The X-Files’ strong suit either. At least in its earlier seasons, the writers and directors managed to create outlandish and compelling “what if” situations and work through them comprehensively in 45 minutes.

It’s a shame that The Man in the High Castle is not better able to prop up a fascinating world. It has the entire duration of a series to do so. Yet somehow, Man in the High Castle crawls. We’re stuck in Canon City, Colorado too long — in the so-called Neutral Zone between the powers where Juliana and Joe meet — or in Frank’s apartment, with him nervously wiling out about Juliana’s unknown whereabouts and the Japanese authorities’ surveillance. It feels like the same scenes are replaying themselves, without tension steadily building. Without spending the excess time on detailed character development, one wonders where all the time goes.

But again, capturing Philip K. Dick-ness is, historically, a challenge. It certainly takes getting more creative and liberal with his source text than Castle’s creators were willing to be. Without going out on a limb — and risking some level of incoherence — Spotnitz’s The Man in the High Castle maintains a steady level of sometimes-oppressive mediocrity across its duration, boasting only a handful of strong performances and legitimately exhilarating moments. Like a lot of TV these days, it feels Just Fine, with little to distinguish it from the dense crowd of other hour-long dramas with solid elevator pitches.

More like this
Culture
8.3.2022 11:30 AM
10 years ago, the worst Philip K. Dick movie ever, pulled off something amazing
By Ryan Britt
Entertainment
9 hours ago
Rings of Power's biggest canon change could ruin one major Tolkien story
By Alex Welch
Entertainment
8 hours ago
Huge Marvel leak reveals 4 of the MCU’s secret upcoming movies
By Alex Welch
Share: