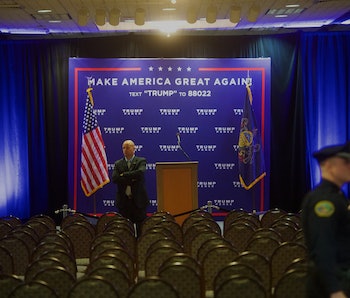 Since 1902, the year after the assassination of President William McKinley, the U.S. Secret Service has guarded the president and his family full-time. At no point is the president ever without some manner of security detail. When the president travels, Secret Service agents arrive in advance to scout out and secure the area. Those in the business of protecting the leader of the free world don’t tend to mess around.

Donald Trump is conscious of his own position and is taking precautions. Those precautions, however, are set to lead to the tightest security a president has ever required. It has to be asked: How far will he go? At this point, it doesn’t seem so far-fetched that Trump’s first State of the Union will be delivered in a bulletproof vest.

Lest that seem unbelievable, it was reported that Trump was in fact wearing a bulletproof vest during his campaign rallies. Salon reported that the vest left Trump “exhausted after speeches” but also gave him some “peace of mind.” It’s no wonder he’d be tired, too. A bulletproof vest can weigh anywhere from 5 to 20 pounds. That’s potentially a lot of extra weight to drag around during an emotive and emphatic speech. That weight comes largely from ballistic plates, made of metal or ceramic, within the vest. They provide most of the bullet resistance. Regardless of the weight, vests cover a significant area of the torso and cause a lot of sweating. They’re clothing for mental, not physical, comfort.

It’s tough to say where Trump would stand among other leaders if he did continue wearing a vest. Among American officials specifically, he would be unique, as it has never been reported that another president or congressperson has worn a vest under normal circumstances. Obviously, a situation like visiting troops overseas or a high terror threat scenario would be different. There is also scant reporting on world leaders from other nations. It doesn’t appear that any others do wear vests, but that’s not to say it doesn’t happen. One can imagine that a political leader would be generally loathe to advertise the exact level of security they have around them. For Trump, that level looks set to be pretty high.

As the president-elect, Trump has of course been given a full Secret Service detail. Part of the presidential transition also includes a transfer in security logistics. Typically, the activities of the presidential security team are not among those that receive much public attention. But, as has often been the case, Trump has seen that norm disrupted. He and his family have made plans and requests that ask for more from the Secret Service and their affiliated organizations than ever before.

Requests for increased security overall, plans to travel frequently between the White House in D.C. and Trump Tower in New York, and Melania Trump’s announcement that she and her son, Barron, will not move into the White House — these things are set to place a strain on Trump’s security like no president before him. It’s already estimated that providing adequate security for Trump Tower during Trump’s administration will cost New York City about $1 million day. It’s also — as some have already pointed out — going to affect people and business in the immediate area. Foot and vehicle traffic is sure to be permanently altered if the First Lady is always in town.

To an outside observer, all of this might seem gratuitous — and some of it may well be. That Melania won’t move into the White House is unprecedented and possibly even selfish, considering the cost that taxpayers will incur. But, on the whole, Trump’s request for beefed up security might not be unjustified, as is the possibility of wearing a bulletproof vest more often than past presidents.

Trump exists in a political environment that’s been highly contentious on both sides of the aisle. Although Trump’s white nationalist supporters have come to dominate the news of late, there is no shortage of violent sentiment toward Trump from the opposition.