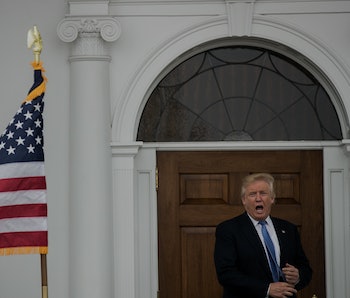 If you wanted find the lowest possible bar for community standards, besides anarchy, you couldn’t do much better than Twitter. The permissive social platform is a never-ending font of pull quotes, and Donald Trump is it’s most powerful spigot. But, though his transition team has made it clear Trump will continue to tweet, he may struggle to push a political agenda in that space if Twitter continues its crackdown on users of hate speech. Some of Trump’s policy suggestions could violate even Twitter’s easygoing terms of use.

At a glance, it might appear that anything goes on Twitter, that users have free reign to censor their speech (or not) as they see fit, so long as it doesn’t violate copyright laws or some other kind of regulation. But Twitter, like just about every popular social media site, does in fact have its own guidelines regarding what is appropriate to post. Its hateful conduct policy, in particular, cites violent threats, wishes for physical harm or death to others, references to mass murder, repeated and/or non-consensual slurs, and behavior that incites fear about a protected group as prohibited forms of speech.

Cut to President-elect Trump, whose speeches have toed those lines and whose policy proposals may well do the same. Specifically, they might run afoul of three of the categories mentioned: Behavior that incites fear about a protected group, wishes of violence upon others, and slurs.

Among the policies that Trump has promised to pursue early on in his presidency include the reinstatement of torture, and the creation of a mandatory national registry to keep track of any and all Muslims entering the United States. Since winning the election, Trump and his transition team have not signaled any intention to walk back from either of those goals.

For any Muslim living in America, the prospect of a registry is surely a fearful thing. If Trump were to post a tweet in the coming days saying that we need to find all the Muslims living the country in order to help keep America safe, it would inadvertently draw a connection between practicing Muslims and acts that threaten our national security. But Muslims, like all religious communities, enjoy protections under the Constitution. If Trump advocated for this via his Twitter account, it certainly reads like a violation of the rules.

The same goes for torture. Twitter has strict policies against violence, and torture is nothing if not the purposeful application of violence in order to extract information. Not to mention, it’s outlawed. Surely, if Trump took to Twitter to advocate for waterboarding — or worse, as he has advocated for in the past — it would not be in keeping with Twitter’s code of conduct.

Lastly, Trump has, literally since the beginning of his presidential campaign, pursued a narrative about Mexican immigrants to the US that would almost certainly be in violation of Twitter’s anti-slurs policy. In his campaign announcement speech, Trump kicked off his stance on immigration by declaring Mexican immigrants to be criminals and rapists. He has since continued along that line, vowing mass deportations and imprisonment. Were he to keep up this kind of rhetoric on Twitter after he’s inaugurated, it would be cause enough for the Twitter admins to cite him for some major violations.

It’s unclear whether Twitter would go so far as to delete a tweet by a president, even if it did violate the hate speech guidelines. But Trump, as the President-elect and soon-to-be President, has the capacity to influence far more people than the average Joe on Twitter. If nothing else, that’s a case for why Twitter should take its rule enforcement seriously, even in these extreme instances.

More like this
Innovation
Jan. 19, 2023
A robot choreographer reveals why M3GAN — and all robots — should dance
By Molly Glick
Science
Jan. 24, 2023
The Doomsday Clock is now at 90 seconds to midnight — here's what that means
By Kiona Smith
Culture
22 hours ago
The Last of Us Episode 3 Steals One Important Trick From HBO’s Best Dystopian Show
By Alex Welch
LEARN SOMETHING NEW EVERY DAY.
Related Tags
Share: