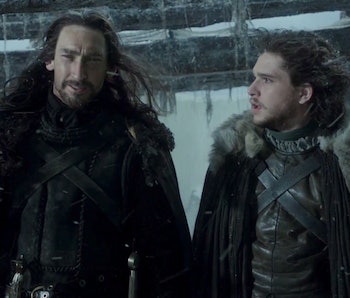 The sixth season of Game of Thrones confirmed one of the longest-running fan theories — Jon Snow’s true parents are indeed Lyanna Stark and Rhaegar Targaryen. But as good as it felt to solve a mystery years in the making, that answer has made the exact circumstances of their meeting the story’s newest pressing issue.

As of now, it’s unclear whether Season 7 will address it with a flashback, but if you’re eager to learn more, the Season 6 DVDs dive into it. As a brief refresher, Rhaegar Targaryen was already married — to Elia Martell — and Lyanna Stark already betrothed (to Robert Baratheon) when Rhaegar won the Tourney of Harrenhal and crowned Lyanna as the Queen of Love and Beauty, as was customary for a tourney winner. The ensuing scandal triggered a war and their subsequent deaths. But if you’re a Song of Ice and Fire fan, that’s not the most intriguing part.

Before Rhaegar’s win and the chaotic events surrounding it, there were five full days of jousting. In the middle of the tourney, a mysterious knight called the Knight of the Laughing Tree appeared to defend the honor of a bullied Howland Reed, Ned Stark’s right hand man who appeared onscreen for the first time in Season 6’s Tower of Joy flashback.

The Knight of the Laughing Tree had a small stature and a heart tree on their shield — implying that they hail from the North — but they disappeared before their identity could be uncovered.

The most common speculation is that the knight was none other than Lyanna Stark. This would make sense because Howland Reed was her father’s bannerman and Lyanna was a tomboy who liked fighting. But the most compelling evidence is that the Mad King sent his son Rhaegar Targaryen after “him.” Supposedly, Rhaegar’s search was unsuccessful, save for the knight’s abandoned shield. But there has always been speculation that Rhaegar did indeed catch up to the knight, and their meeting prompted him to then crown Lyanna as the Queen of Love and Beauty. Framed in that way, the story supports the notion that there was genuine love between the two.

Now that we know that Rhaegar and Lyanna are Jon’s true parents, the theory holds more merit than ever. Ellie Kendrick, who plays Howland Reed’s daughter and Bran Stark’s traveling companion, Meera, narrates the animated version of the story on the Season 6 DVDs.

While an animated extra isn’t quite the same as an onscreen confirmation, it’s the closest the show has come. Jon Snow might still know nothing, but the viewers at least know something.