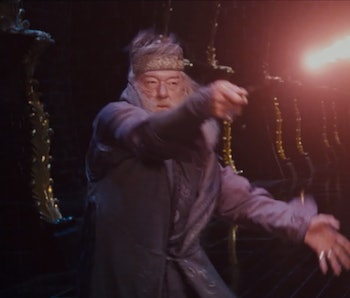 The muggle version of owl delivery, Amazon, is letting muggles cast spells. So, now you can do your part this weekend, alongside Newt Scamander and Porpentina Goldstein, when Newt’s beasts escape in Fantastic Beasts and Where to Find Them. Someone should probably inform the Ministry of this breach in secrecy.

In honor of the premiere of Fantastic Beasts this Friday, Amazon is gifting the muggles of the internet with some magic. J.K. Rowling’s Pottermore has shown everyone their Patronuses and the cores of their wands, but casting the spells via the internet has been a lost cause until now.

If you go to Amazon’s website and type in some keywords (listed below), flames will burst to life before your eyes, which, of course, will need to be doused by a roaring wave or two. And you’ll be able to find your way through even the darkest of nights as you fight off your enemies with a glass-shattering attack.

“Orchideous” springs, well, spring across your screen during the chilly grip of November.

The always-popular “Lumos” is a reassuring, guiding light.

Newt Scamander’s beasts don’t stand a chance against your attacks with the “Reducto” spell.

But if you’re feeling thirsty, “Aguamenti” might be the way to go.

Finally, end it all with “Incendio,” and go out in fiery style.

Fantastic Beasts and Where to Find Them hits theaters this Friday, November 18.

More like this
Culture
Jan. 15, 2023
How Brad Pitt beat the odds to make an underrated zombie classic
By Jake Kleinman
Gear
Jan. 19, 2023
Why Apple's rumored smart display could be doomed from the start
By James Pero
Culture
Jan. 13, 2023
How Jake Gyllenhaal and Ryan Reynolds made a shockingly good Alien ripoff
By Josh Bell
LEARN SOMETHING NEW EVERY DAY.
Share: