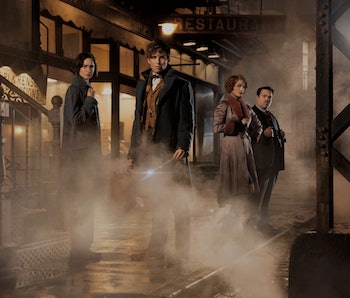 Chances are, you’ve read the Harry Potter books, you’ve seen the movies, and you plan to see the not-quite prequel film Fantastic Beasts and Where to Find Them. But just as there are different Hogwarts houses, there exist many different levels of wizarding World fandom. As the Potter universe continuously expands onto platforms like Pottermore (and J.K. Rowling’s Twitter), some fans keep up with ancillary content, while some just stick to the movies and books.

If you’re in that latter category of fandom, and if you haven’t re-read the books a hundred times, some of the conversation around Fantastic Beasts might sound a little inaccessible. Let’s lift your Confundus charm and review what you need to know.

If you are a fan who does casually peruse Pottermore and J.K. Rowling’s Twitter, you can skip this item. If you have been living in a cave like Sirius Black did in Goblet of Fire and subsequently know very little about Beasts, this is for you.

Fantastic Beasts is set in 1926 wizarding New York and is about Newt Scamander, who is a magizoologist and a Hufflepuff. Yes, this means the House everyone previously thought was lame will now have its time to shine.

He shares a lot of similarities with Hagrid in the sense that he loves dangerous creatures and was also expelled from Hogwarts in a creature-related incident while Dumbledore came to his defense. In the future, his grandson ends up marrying Luna Lovegood, so draw your own conclusions from that about his personality.

He keeps his creatures in an expandable briefcase much like the one Barty Crouch Jr. stores the real Mad-Eye Moody in in Goblet of Fire or Hermione’s ever-expanding beaded bag in Deathly Hallows. The movie’s events are set in motion when his creatures escape into a society in which tensions between wizards and muggles are high.

If you are a mid-level Potter fan, you can tell Bill Weasley from Charley but can’t necessarily discern a hedgehog from a nargle or remember the name Neville’s toad … and this is for you.

A big instigator of the film’s plot is the International Statute of Secrecy. This was a minor detail in the Potter books that got a particular shout-out in both Chamber of Secrets and Goblet of Fire. Remember how much they freaked out about the flying car? Mr. Weasley also explains to Harry about the stadium for the Quidditch World Cup, “Muggle Repelling Charms on every inch of it. Every time Muggles have got anywhere near here all year, they’ve suddenly remembered urgent appointments and had to dash away again …”

This is because of the International Statute of Secrecy, which protects the Wizarding World from discovery. When Newt Scamander accidentally lets his magical creatures roam the streets of New York, this breaks an international law and is cause for major alarm.

Finally, if you remember the Harry Potter events but there are just too many damn characters with complex histories, this is for you. Fantastic Beasts takes place several decades before Harry Potter, which means that few Potter characters will make appearances. But a handful of characters will be important: Luna Lovegood (because she marries Newt’s grandson), Gellert Grindelwald, and Albus Dumbledore.

Yes, you’re not an idiot, you know Dumbledore. But here’s a refresher on the most pertinent part of his life. When she was a young girl — prone to accidental and undisciplined magic as all witches and wizards are — his sister Ariana was attacked by Muggle boys. It’s implied that she was raped. As a result, she withdrew and refused to use her magic. Because you can’t just chose to not have magic, it drove her mad. Instead of sending her to school, Dumbledore and his family had to hide her away.

When Dumbledore was a teenager, a boy named Gellert Grindelwald moved into his neighborhood. The two struck up a friendship — heavily implied to be romantic in nature — and resolved to find the Deathly Hallows together to attain power “for the greater good.” A key component of their power? Overturning the International Statute of Secrecy to enable wizards to openly rule over Muggles.

Their friendship ended explosively when a three-way fight between the two boys and Dumbledore’s brother Aberforth which resulted in Ariana’s death. As Aberforth tells Harry in Deathly Hallows:

He got angry. He told me what a stupid little boy I was, trying to stand in the way of him and my brilliant brother … Didn’t I understand, my poor sister wouldn’t have to be hidden once they’d changed the world, and led the wizards out of hiding, and taught the Muggles their place? And there was an argument … and I pulled my wand, and he pulled out his …”

Grindelwald later became a dangerous Dark wizard. Dumbledore eventually defeats him in a duel, but Fantastic Beasts is years before that duel, at the height of Grindelwald’s power.

Although Dumbledore will only be referenced in Fantastic Beasts, he will appear in its four sequels. Grindelwald will also be vitally important as he is the Voldemort of the world at this time.

Fantastic Beasts and Where to Find Them hits theaters November 18.