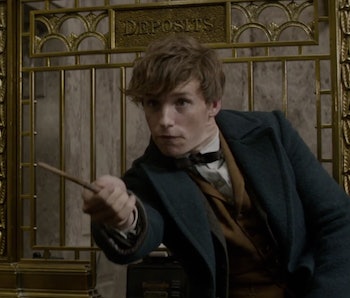 Newt Scamander might have an even bigger headache than a trunkload of escaped beasts during his American adventures this winter: culture shock. In a new trailer for Fantastic Beasts and Where to Find Them, Newt has to adapt to an American way of thinking (and speaking) while fighting off proto-Death Eaters and the looming presence of a nefarious villain from the Harry Potter series: the dark wizard Grindelwald.

In the existing mythos of the expansive Harry Potter universe, non-magical people are referred to as “Muggles” in the UK, and “no-mags” or “non-mages” in the U.S. “We call them Muggles,” a confused Newt says in the new trailer after being asked by Tina Goldstein (Katherine Waterston) if he erased the memory of a non-magical person.

Newt is a fish-out-of-wizarding-water in 1926 New York, but some of the dark forces from the European continent may have followed him to the New World. The new trailer has some very specific talk of Albus Dumbledore’s former friend turned dark wizard, Gellert Grindelwald, hinting at a deeper connection to the Potter lore.

In the trailer American wizards specifically mention that the growing attacks on humans perpetrated by Percival Graves (Colin Farrell) are “related to Grindelwald’s attacks in Europe.” This means Newt’s happy-go-lucky adventure to recapture all of his escaped fantastic creatures will also be wrapped up in the larger story of the dark wizards who preceded Voldemort.

Grindelwald’s dark deeds of the past are a big deal in understanding Dumbledore’s backstory in the later Harry Potter books. In this way, Fantastic Beast and Where to Find Them will give us two insights into the wizarding world: a deep dive into the American version of magic and also a story which shows the the early days of dissident wizards who will eventually become the Death Eaters.

Fantastic Beasts and Where to Find Them opens in theaters on November 18.