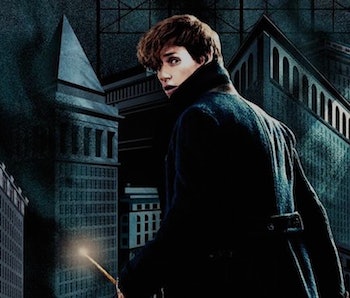 The Harry Potter play — somewhat disingenuously advertised as “the eighth story” of the saga — was not up the the standards of the rest of J.K. Rowling’s magical series. This isn’t to say your opinion is not valid if you liked it. But it was riddled with plot holes where the original stories held up to scrutiny, it had inconsistent characterization, didn’t seem to know how Fidelius charms work, and included this line: “Squeak. My geek-ness is a-quivering.”

Needless to say, the majority of the fans were not overjoyed with Cursed Child. And because the Potter universe is soon getting another new entry with the film Fantastic Beasts and Where to Find Them, many will wonder: is this an ominous sign? Should you, a loyal Potterhead, prepare to be disappointed?

In a word, no. For one, Cursed Child was not penned by Rowling herself; Fantastic Beasts is. That makes a huge difference.

But most importantly, rather than risk ruining the Potter story, Fantastic Beasts will carve new ground. It will play within the Potter universe, but not revisit old territories. We’ve already gotten an intriguing teaser about one of the characters that will expand our understanding of Legilimency. This means that Fantastic Beasts will not be able to contradict things like Fidelus charms and the logic of time-turners if it’s busy playing in other corners of the sandbox. We also won’t get nonsensical dialogue like “Squeak. My geek-ness is a-quivering,” because Rowling generally excels at writing the way real humans actually speak.

We won’t be able to complain about people acting out of character — like Ron inexplicably getting the Weasley twins’ personality and forgetting his bad history with love potions — because aside from the odd Dumbledore reference in the trailer, we will be dealing with all new characters.

Eddie Redmayne’s Newt Scamander is Luna Lovegood’s grandfather-in-law, but he’s got his own personality we don’t know yet. With new magic, a new setting in the American magical world, and new characters, Fantastic Beasts will be the right way to expand the Potter universe. Now that’s something to drink a firewhiskey to.