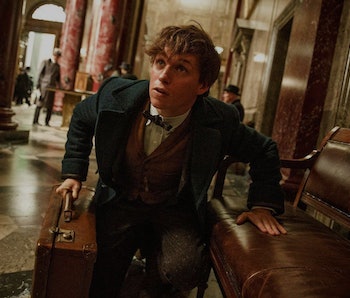 Unlike the Cursed Child, Fantastic Beasts is actually written by J.K. Rowling, who has taken the bold step to expand the system of magic she set up with a new power that could change how the film’s talented cast interacts.

The film’s producers recently announced that one of Fantastic Beasts’s main characters, played by Alison Sudol, will have a mind-reading power similar to, but notably different from Legilimency, the somewhat sinister art practiced by Snape and Voldemort in the existing Potter lore. Recall that Harry did not exactly excel at the Wizard mind reading practice, and Snape was not exactly helpful.

Fantastic Beasts’s Queenie Goldstein (related to Harry’s classmate Anthony Goldstein), an employee of the Magical Congress of the United States of America, is much better than Harry at mind games. She’s such an accomplished Legilimens that she’s basically bringing some telepathic Sookie Stackhouse action into Harry Potter.

Alison Sudol told Entertainment Weekly all about her character, Queenie.

She’s basically a complete and utter magical empath. Shes able to read people, so it’s not just reading somebody’s thoughts. She’s can read into someones story, she can see people’s goals. And so even though she’s able to do magic with her wand, a lot of her magic is actually internal, which makes her a different type of wizard or witch. And she’s incredibly fun, playful, joyful, and free-spirited, kind and wise, and also has a sort of stillness about her because she’s always tuning into people, so she’s quite an interesting character to play very vivacious and lively, yet very centered and aware.

Even accomplished Legilimens like Dumbledore, Snape, and Voldemort couldn’t do that. Queenie sounds like a mix between Luna Lovegood — Newt Scamander’s granddaughter-in-law — Dumbledore’s sister Arianna, and her own unique character. Now thats a way to expand the Potterverse in a way that doesn’t involve Time-Turners, secret children, and baffling pastry-grenades.

Fantastic Beasts and Where To Find Them will be on screens November 18.