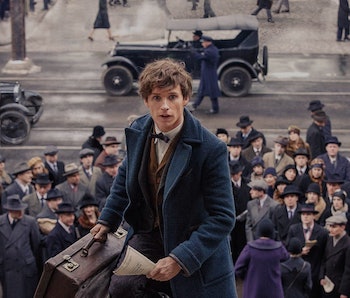 Newt Scamander, the Harry Potter universe’s leading magizooligist, definitely plays favorites in his menagerie of beasts — and his number one critter is a recalcitrant sentient stick-bug named Pickett.

In a new interview, Redmayne has revealed that Scamander plays favorites: He favors the Bowtruckle, the species Pickett belongs to.

“There’s a specific Bowtruckle called Pickett who Newt loves,” Redmayne said. “Pickett has attachment issues, and Newt lets him swing along in his top pocket.”

The latest entry in the Harry Potter Universe — Fantastic Beasts and Where to Find Them, which hits theaters in November — will both expand the world and revisit elements we’re already familiar with, like the wild variety of magical beasts. We’ve met all manner of magical fauna from Thestrals to Blast-ended skrewts in Harry’s Care of Magical Creatures classes, but they were always in the background of the story, only relevant insofar as they aided or hindered Harry on his adventures. Since Eddie Redmayne’s Newt Scamander is a magizooligist, the beasts (like Pickett) will be front and center in this story.

Bowtruckles are twig-like creatures that dwell in trees and are therefore difficult to spot. Harry himself mishandles one in Order of the Phoenix, when Hagrid is off on his mission to be a liason to the giants and Professor Grubbly-Plank gives a vague and unsatisfactory explanation about his absence. Malfoy is naturally a dick about it, and in Harry’s anger, he squeezes a bowtruckle too tightly. It gashes his hand and angrily marches off into the Forbidden Forest.

Just like Hufflepuffs, it looks like bowtruckles will get their just due at long last in Fantastic Beasts.

Other intriguing creatures Redmayne mentions are The Swooping Evil (“He’s like this spiky ball with a thread that hangs down from Newt’s finger. When you spin him out, almost like a yo-yo, he unfurls into this terrifying creature,” he said) and The Demiguise (“It has this capacity to go from being visible to invisible, so their pelts can be used to make invisibility cloaks.”)

Fantastic Beasts and Where To Find Them hits theaters on November 18.