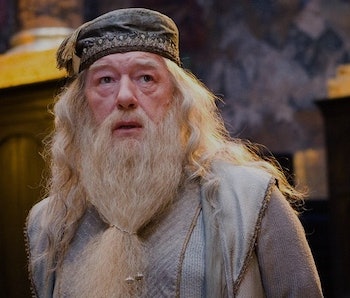 The legendary wizard Albus Dumbledore was once in love with his best friend, Gellert Grindelwald and, there’s every reason to believe we’ll see that romance play out on the big screen in one of the sequels to Fantastic Beasts and Where to Find Them.

We know that a Hogwarts-era Dumbledore will be making appearances in the films following Fantastic Beasts and Where to Find Them, and that Grindelwald’s uprising is on the minds of American wizards. So, it seems possible we’ll get a fanfic-style “Grindledore” love at some point in this series.

It’s easy to assume that Fantastic Beasts is a fun way to break into a much more complicated issue in the world of Harry Potter: the rise of dark wizards such as Grindelwald and — later in the 20th century — Voldemort. J.K. Rowling has wound the story of Grindelwald so tightly with that of Dumbledore that it will be impossible for the filmmakers of the next four Fantastic Beasts films to separate the two.

With the news that Johnny Depp will (probably) be playing Grindelwald, that’s got us thinking that the creators are going to be sticking to a correct timeline. During Fantastic Beasts, Grindelwald should be in his early 40s — about 44 years old — and Dumbledore would be a Transfiguration professor at Hogwarts. He took on the role after the death of Ariana in 1899 when Grindelwald fled the scene and began gathering his followers.

Dumbledore faced and defeated Grindelwald in an epic duel in 1945, 19 years after the events of the first Fantastic Beasts. That gives the filmmakers of the four future films a good amount of time to explore the complicated relationship between the two, which Dumbledore later admitted to regretting.

A romantic relationship between two male wizards in the Harry Potter universe would be a step forward for the creators. J.K. Rowling didn’t reveal that Dumbledore identified as gay until after the end of the original series, and outwardly non-heterosexual relationships are nonexistent in the HP books and movies thus far. Seeing a Dumbledore who has flashbacks to his young summer romance with Grindelwald as he’s faced with the reality of what his former friend has become would be equally as fascinating as it heartbreaking.

As far as we know, Dumbledore never had another person in his life who he felt that way about, and we know that everything else in Dumbledore’s life ends tragically. So, please, give us just a little glimpse into when Dumbledore was once happy.

Fantastic Beasts and Where to Find Them (briefly featuring a middle-aged Grindelwald) hits theaters November 18.

More like this
Entertainment
8.6.2022 1:00 PM
Static Shock live-action movie is "still in development," Denys Cowan says
By Eric Francisco
Entertainment
8.2.2022 10:09 PM
Batgirl isn't being released, at all, but not because of "quality"
By Eric Francisco
Science
8.5.2022 1:00 PM
The most miraculous sci-fi movie on Netflix reveals a scientific debate over aging
By Tara Yarlagadda
Related Tags
Share: