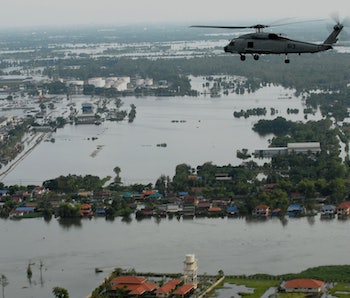 Donald Trump has said that, if elected president, he will back out of the United States’s promises under the Paris climate change agreement, which was enacted just five days ago. If Trump wants to undermine international cooperation on climate change, he can do it, legally and effectively, despite provisions that lock the U.S. into the deal for at least four years.

The signing of the Paris deal was fast-tracked earlier this year as the specter of a Trump presidency loomed. “We have no time,” UN Secretary General Ban Ki-moon said in September.

According to the provisions of the agreement itself, the United States cannot remove itself from the deal for three years, after which it would still be committed for an additional year. There’s another option, and it’s far more aggressive: Trump could withdraw from the 1992 UN Framework Convention on Climate Change with just a year’s notice, according to Climate Central. This would take the U.S. out of the Paris agreement, and also out of all international efforts to cooperate on climate change action. This is the nuclear option.

The worldwide blowback from either of these two formal withdrawals would be dramatic and swift, and with some luck Trump and his administration will be savvy enough to avoid them. But he has another more insidious, potentially as disastrous, option: Simply ignore commitments made under the climate change deal and move forward with plans to dismantle environmental regulations and prop up fossil fuel industries.

The Paris climate change deal does not, as Trump himself as asserted, give “foreign bureaucrats control over how much energy we use.” It is a set of commitments made by countries independently, with few mechanisms for enforcement beyond diplomatic pressure. If Trump chooses to go ahead and abolish the Environmental Protection Agency and block President Barack Obama’s Clean Power Plan, no international police force is going to march in and stop him.

These actions will all but ensure that the United States falls well short of its goals under the Paris deal, and it will certainly undermine the efforts of the rest of the world as well. The fact is that international cooperation on climate change needs American leadership. Developing nations want to see that industrial nations, which are responsible for the vast majority of past emissions, are doing their part. It’s highly unlikely that the Paris agreement would ever have been signed without the joint leadership of the United States and China — the planet’s two largest emitters.

A Trump presidency will hobble international cooperation on climate change, if not dismantle it completely. There is no time for a backslide. Even the commitments contained in the Paris deal aren’t enough for the planet to avoid disastrous levels of warming. Every second of inaction brings us closer to irreversible and calamitous change.

How will the people of Florida remember this moment in 20 years when the state is engulfed in disastrous storms and rising tides?