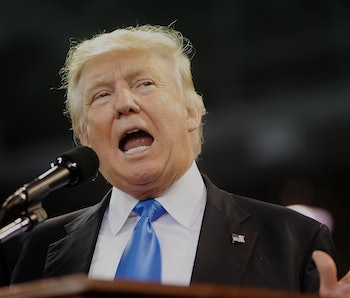 The United Nations and sane people everywhere are in a genuine state of panic that Donald Trump could derail the Paris climate change agreement if elected to the presidency. However, the Republican candidate’s skeptical stance on global warming has had the ironic consequence of hastening global cooperation on commitments to reduce fossil fuel emissions.

In a rare diplomatic show of speed and unity, UN Secretary General Ban Ki-moon is expected to announce Wednesday that enough countries have formally approved the Paris Accords to allow for it to enter into force this very year, which would tie the hands of the next American government for four years.

That’s because the UN — and sane people everywhere — are genuinely panicked that Donald Trump could derail the agreement if elected to the presidency.

“We have no time,” Ban said before the General Assembly on Tuesday, according to the New York Times. “I urge you to bring the Paris agreement into force this year.”

World leaders agreed to the substance of the climate change accord at a conference near Paris late last year. The success came after decades of false starts and last minute implosions on attempts to secure international agreement on fossil fuel reductions. The 55 countries representing more than half the countries responsible for global greenhouse emissions have to formally approve the agreement through their own political processes before the deal can come into force.

The UN isn’t known for being speedy when it comes to its work. But Trump has vowed to pull the United States’ commitments to climate change action at the first opportunity, and if he does, global cooperation on the deal would almost certainly fall apart. The Republican candidate has been vocally skeptical of climate change, which has had the ironic consequence of actually hastening global cooperation on commitments to reduce fossil fuel emissions. On Tuesday, 375 members of the National Academy of Sciences, including 30 Nobel Prize winners, released an open letter condemning Trump’s promise to pull out of the accord.

Climate change is one of America’s favorite political footballs, a fact that seems alien to the international community, which is largely on board with the idea that global warming is dangerous and demands decisive action.

It’s clear that Trump’s words have consequences, even absent formal power, although they might not be the consequences he intends. Just as the presidential nominee’s anti-Muslim rhetoric is being used as a recruiting tool for terrorists, his stance opposing climate change action is actually spurring it.