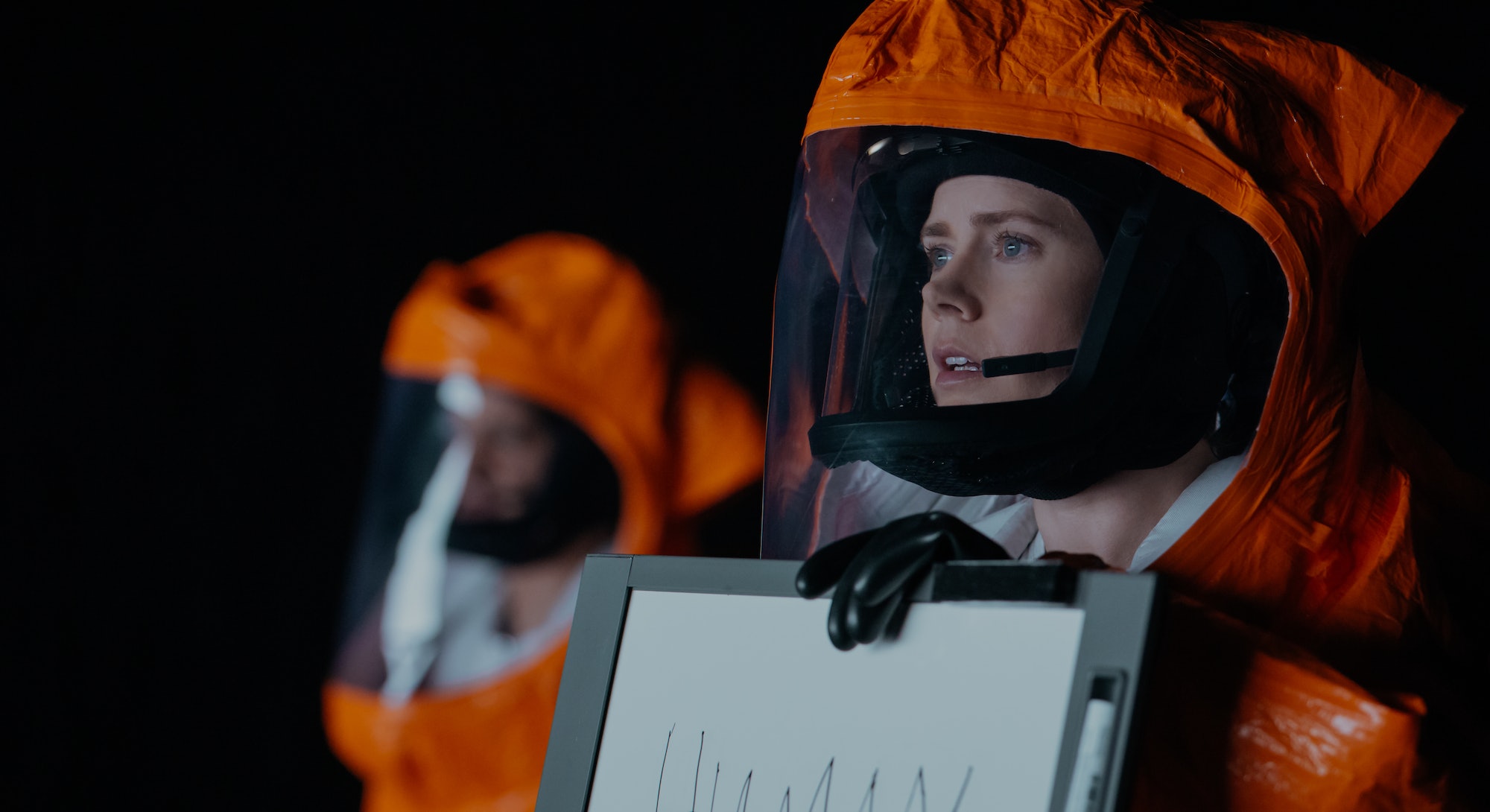 In the new Denis Villeneuve space-opera Arrival, 12 pods from outer space land at various locations on Earth, each operated by a strange species of alien. The American government enlists a linguist — Louise Banks, played by Amy Adams — to try to figure out what these extraterrestrials want, but it’s not going to be easy.

The first, and most significant, hurdle is language. How is someone who’s learned only Earth-based languages supposed to communicate with a group of beings that gurgle out croaks and write in what look like inky floating coffee stains?

Studying alien languages might seem like a silly, science fiction fantasy. But at the rate we’ve discovered more habitable Earth-like worlds, we are bound to encounter an alien species pretty soon. Sheri Wells-Jensen, an associate professor of linguists at Bowling Green State University, is one of a tiny group of people who has actively thought about how an alien species will communicate with humans.

The only thing she knows for sure is that there’s no way to know how they’ll communicate.

“It’s profoundly humancentric to think they’ll talk like us and look us,” Wells-Jensen told Inverse. The fact that most sci-fi revolves around aliens who speak through voice boxes like us, are bipedal, and even have vaguely anthropomorphic faces limits our imagination as to how extraterrestrial beings will speak when they get here. In reality, more likely than not, their bodies won’t operate or look a single thing like ours. And that means their communication mechanism will be wildly different from ours.

“We’re only beginning to understand that the way we think and communicate and what we build is determined by the way our bodies are shaped and our sensory apparatus,” Wells-Jensen said. For example, if we didn’t perceive sound waves, then our use of sound as a communication device would not exist. Consider the way deaf people communicate so expressively with their hands and faces, and are unable to lasso their voices into the pitch and tone the way hearing humans do when they talk.

Anatomy and physiology do more than dictate how we speak; it’s our way of understanding the world, which is vital to how early humans developed the language, and how we comprehend the world around us. “What if you had a race of aliens that couldn’t see? In what ways would that change the way they built their civilization and how they understand their world?” Wells-Jensen proposed. “We have some data to suggest that the way we are physically built might influence the way our language is structured. It’s because we walk erect, our top appendages are free, and we have to use our hands to do things.”

Language, after all, is a verbal reflection of how we understand our world through our bodies: We crawl, we stagger, we cry, we laugh. We look to see the stars, taste our morning coffee, smell the garbage on the streets, rub our hands in nervousness. Which makes the heptopods that Louise Banks deals with in Arrival an especially hard one to understand, given that they experience the world with seven fingers, no obvious eyes or ears, and a language based purely on sound reverberations.

There’s also the fact that even if we did come to a point where we could speak the same language as an extraterrestrial species, we wouldn’t have the language to express certain concepts. “You see this with those lists of things in English that we don’t have a word for,” Wells-Jensen points out. And it could happen the other way around too — extraterrestrials might have phrases for concepts that they don’t have words for, which means we’ll have a rough time getting their worldview as well.

Doug Vakoch is the president of Messaging Extraterrestrial Intelligence, METI International, which works with its sister organization SETI (the S is for search) and, in 2011, wrote the definitive textbook on xenolinguistics, Communication With Extraterrestrial Intelligence. He says the dominant approach to how we’ll figure out how aliens speak will actually be the Jeremy Renner character in Arrival — through the universal language of mathematics.

“If aliens have an ability to send us messages, they have to be able to create radio and telescopes,” Vakoch reasons. “If they can build spacecraft to come to come to Earth, they have to have an understanding of good engineering, physics, science, math.” The current methods used by SETI is to do a data dump, with researchers shooting off notes into the ether, hoping some will get intercepted.

We’re already trying to make contact with extraterrestrials, and mathematics is the language of choice. Vakoch calls Arrival’s introduction of a linguist “radical” — and challenging. Math is inherently simple and devoid of meaning: a 1 has no feelings, no concept behind just being a single digit representing one unit of an object. “But doing the nitty-gritty work of going back and forth and making guesses at what an alien says, trying to interpret swirls” — as Louise Banks does in the movie — “and determining a sentence or concept? It’s hard.”

But in theory, it would definitely be more effective, Vakoch said. “Conveying matters. You need flexibility of language with its infinite combinations. Our art and culture — that’s all from language, that’s not from just raw numbers.”

Arrival tackles this concept, along with the idea that the very way we think is deeply ingrained within our language. That’s the Sapir-Whorf hypothesis, which suggests that our language is integral to how we think. Neuroscientists aren’t completely sure how language re-shapes our brain, but the question Jeremy Renner’s mathematician character asks Amy Adams’s linguist character — “Are you dreaming in their language?” — is not entirely fantastical.

In a study published earlier this week in the journal PNAS, researchers used people who communicate through sign language to understand how the brain processes language. It lines up with how linguist of Arrival approaches the heptopods of Arrival: With that universal symbol of openness and welcoming, an open hand, palm outstretched.

“Sign language has a structure, and even if you examine it at the phonological level, where you would expect it to be completely different from spoken language, you can still find similarities,” Berent said in a press release. “What’s even more remarkable is that our brain can extract some of this structure even when we have no knowledge of sign language. We can apply some of the rules of our spoken language phonology to signs.”

That means our concept of language is flexible, and we aren’t incapable of figuring out how to communicate with aliens — we simply must adjust our brains.

One thing is for sure: Humans don’t have a good track record of communicating with each other — and we’re the same species. The movie touches on this as well, with communication (ironically) breaking down between the other stations as they try to race to understand the role of the heptopods. “It’s a cheat answer, but it’s true,” Wells-Jensen said. “We’re a young race. We’ve only gone a couple hundred thousand miles to our moon and back. These races might be older than us. We’re maybe not even the first race they’ve met.”

There’s no way for us to prepare for communicating with an alien species — and that’s okay. What’s important is that we have to understand how to use what we have as humans to bridge the divide and create a conversation without implying that we as humans are the superior race — because we’re probably not. “We can’t use ourselves as a starting point,” Wells-Jensen said. “We are an endpoint at looking at things. We are the product of evolution. We’re like pond scum.”