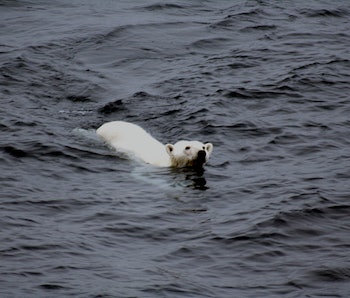 If humans continue to burn greenhouse gasses at our current rates, we will witness complete Arctic melt by September of 2045, give or take a few years.

That’s a conclusion of a Science study published Thursday that scraps fancy computer models of the Earth’s climate in favor of a neat, linear relationship derived from the observational record over the past 60 years. They found that, for every metric tonne of carbon dioxide pumped into the atmosphere, three square meters of Arctic sea ice was lost. An average American is responsible for an ice loss of about 60 square meters, or 650 square feet, every year.

“For the first time, we obtained a physically based relationship on past and future ice loss directly from the observational record rather than from climate models,” lead author Dirk Notz of the Max Planck Institute for Meteorology tells Inverse by email.

The study did not try to estimate when exactly the sea ice will disappear, since that depends on whether greenhouse gas emissions increase, decrease, or stay the same over coming decades. The authors, however, set a specific carbon budget for ice loss: When 1,000 billion more tonnes of carbon dioxide pumped into the atmosphere, we will see a fully open Arctic at the end of summer, when ice is at its annual minimum. How long it takes to spend that budget is yet to be determined.

What’s shocking about this study’s results is that it suggests that climate models have, on average, been underestimating upcoming Arctic sea ice loss. And the researchers are pretty dang sure that this linear relationship will hold into the future — it holds steady not only for the observational record, but also for future projections in all model simulations that they analyzed. “This gives strong evidence that this robust relationship will not suddenly break down,” says Notz.

“Nothing in this model, which is simply based on the geometry of the system, suggests that the linearity will stop in the next couple of decades that we focus on.” Over centuries, ocean processes will disrupt this linear relationship, but they are not expected to have significant effects in the immediate future, he says.

It’s worth noting that keeping global greenhouse gas emissions flat decades into the future is an extraordinarily ambitious goal. Even if every country meets its promises under the recent Paris climate change agreement, global emissions are still expected to rise dramatically to as much as 55 billion tons of CO2 equivalent annually by 2030, from about 35 billion tons today. The world would have to dramatically overshoot its goals just to maintain current emission levels, let alone cause them to fall.

With that in mind, it’s highly likely that the Arctic will be completely ice-free in September at some point in the next 25 years. That’s remarkable, and something the planet hasn’t seen in 100,000 years.

It could be good news for oil companies, for which Arctic ice is a barrier to enormous fossil fuel resources. But what’s good for oil companies is bad for life on this planet as we know it.