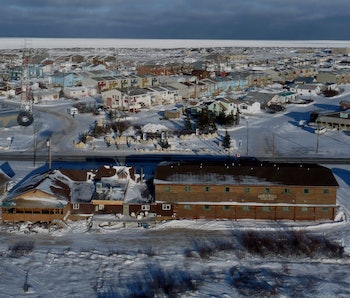 Erin Greene was walking home with another person from a halloween party in 2013.

Suddenly, without warning, her attacker was on top of her. “I remember how fast he was, how he didn’t make a sound,” she recalled, a year later, at a town gathering. “I remember my own voice screaming for help as his teeth sunk into my head. I remember thinking, this is how I die.” Her attacker was more frightening than a man in a Freddy Krueger mask. In fact, it was the largest land predator on Earth — a polar bear.

The bear tore three of Greene’s arteries, her scalp, and a part of her left ear. She survived, as did the man who was mauled in an attempt to get the bear away from her. The bear, and another that got caught up in the ensuing bear hunt, were not so lucky.

At the time, Greene lived in Churchill, Canada, the polar bear capital of the world. Every fall, about 1,000 bears congregate there after a months-long fast, waiting for Hudson Bay to freeze up and give access to prey that can only be hunted from sea ice. Halloween is smack in the middle of polar bear season.

It’s a scary time of year, particularly for parents. “Guns and children don’t mix. But then again, neither do children and polar bears,” explains Zac Unger for Up Here magazine. “So when it came time to take my children trick-or-treating in bear country, I made sure to surround myself with as much firepower as possible.”

On Halloween, the normally sleepy town of 800 residents turns into a bit of a war zone. Emergency vehicles make a perimeter around the town, leaving lights flashing in an effort to deter curious, hungry polar bears. A helicopter circles overhead, scanning the area with a spotlight.

There are rules for high-stakes trick-or-treating, according to Unger:

#1. Go door-to-door with as many friends as possible. Bears love Snickers bars, but are unlikely to attack large groups of people. #2. Any able-bodied person who owns a gun should take that gun and spend the evening driving around town looking for anything white lurking in alleyways. #3. Children must not dress as ghosts, skeletons, princesses or anything else that might cause them to be mistaken for polar bears because, well, see Rule #2. My kids were dressed as various Star Wars characters; I was dressed as a weak-kneed Californian who’d never fired a gun and was thus forced to rely on the armed kindness of strangers.

Greene’s story, and the story of Churchill’s polar bears, is told in a television series, Polar Bear Town, to debut on Smithsonian Channel November 16. The series has aired previously on Canada’s Outdoor Life Network.

For residents of Churchill, polar bears are a danger and an opportunity. Much of the town’s economy depends on 10,000 tourists that flock every fall to the remote town, accessible only by train or plane, for a glimpse of the bears. The bears pose little risk to tourists, so long as they follow the directions of their guides, and don’t do anything particularly stupid.

But tourists definitely pose a risk to the bears. The community works very hard to keep the bears alive and safe. The Polar Bear Alert Program does its best to spot bears before they get too close to the town, scaring them off with guns, helicopters, and trucks. Particularly stubborn animals will get shot at with a tranquilizer gun and transported to a holding facility, known as Polar Bear Jail, where they will stay until the sea ice freezes and seal meat beckons.

The program has been incredibly successful in protecting both humans and bears, especially since the closure of the town dump in 2005. But any bear that evades the authorities, and manages to maul or kill a human, must die, according to policy.

No person has died in Churchill from a bear attack since 1983, and maulings are rare. But conflict with humans will likely rise as the Arctic gets warmer, thanks to climate change. Longer summers mean polar bears will be hungrier in the fall as they wait for the return of the sea ice. Desperate bears make dangerous bears.