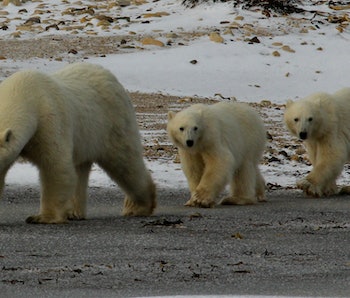 Polar bears have for many become the symbol of catastrophic climate change — when the ice melts, the bears will lose access to prime seal-hunting grounds and starve, or so the story goes. But that narrative is wrong and needs to change, says a researcher who has been studying the bears of Northern Canada for nearly 50 years.

“These are not stupid animals,” Robert Rockwell of the American Museum of Natural History tells Inverse. “These are very clever, very cunning, incredibly patient hunters. And to just assume that they’re going to stand on the shoreline holding a placard that says ‘I’m starving, please send me some ice and seals,’ is hubris in the extreme. It is just sort of like assuming that, OK, your job’s going to go away tomorrow so you’re going to starve to death. It’s probably not true. You’re probably going to figure out some way to persist.”

Rockwell co-authored a study published last week in PLoS ONE that asked if polar bears might be able to make up for the loss of access to seals by hunting on land.

Lead author Linda Gormezano came up with the question because she had already documented a shift in polar bear diets towards caribou and snow geese, using scat samples going back to the 1960s, Rockwell says. The study used a model that previously predicted mass bear die-offs when ice-free days on Hudson Bay increase to 180. The researchers asked are there enough calories available to bears on land to offset losses from reduced seal hunting opportunities?

“It turns out that there’s a whole lot more available than is actually required to offset the catastrophic result that [the earlier study] predicted,” Rockwell says. That was just looking at what’s available in terms of snow geese, their eggs, and caribou — and there are lots of other things that the bears have already figured out how to eat.

Whether or not they are able to survive will depend on how efficiently the bears hunt those food sources. “To know the actual energetics of that you have to know things that are just, at the moment, unknown,” Rockwell says. “You would need real, honest to God, oxygen-consupmtion-as-a-function-of-speed-of-running data, stuff like that, which would require putting polar bears on treadmills.” That hasn’t been done, and probably won’t be any time soon, he says.

But again, bears are really freakin’ good hunters. “Eating eggs is pretty simple — even I can outrun an egg,” says Rockwell. “Catching flightless geese, that’s also not too hard. They round them up against dead willows, stuff like that, and snatch out 11 at a time, so they have a good feed that way.”

The bears mostly hunt caribou using an efficient ambush technique — they’re not chasing the animals all over the tundra. And they’ve figured out how to ambush seals congregating on the shore (“They can’t tread water for the whole summer,” says Rockwell) and even catch the odd baby beluga.

“They actually ambush them from rocks in the shallow tidewater as the tide is going out at low tide,” says Rockwell. “They get into the estuaries where the whales are feeding their young and stuff like that, and as the water gets shallower and shallower they literally jump off rocks and grab them, kill them, and eat them.”

The polar bears deserve to be honestly studied, not to be the subject of more “dire, doom-and-gloom predictions,” says Rockwell. This attitude has seen him accused of being a climate change denier and worse, he says.

“I’ve been told that I’m working against the better interest of polar bears by saying that there might be hope. And I’m not saying that there might be hope, I’m saying let’s see what they’re doing,” he says. “And what they’re doing is not standing there like some automaton doing nothing. They’re actually trying to solve their own problem. Is it going to work? I don’t know. Do they need protection? You bet. Any top-end carnivore in an environment as labile as the Arctic needs protection. There’s no question about that.”

Humans are already showing that they can adjust to a changing world, and so are the bears, says Rockwell.

“In the true sense of ‘arrogance that offends the gods,’ hubris is something that really bothers me. And I think that the one thing that we as humans and we as scientists need to always be aware of, is not to sell the rest of the biological world short.”

More like this
Science
8.10.2022 3:27 PM
Climate change may push North America’s forests to a “tipping point”
By Tara Yarlagadda
Science
8.3.2022 12:15 PM
Look: 7 Great Salt Lake images reveal how shockingly fast its shrinking
By Jennifer Walter
Science
8.14.2022 1:00 PM
'Gifted' dogs may share this one personality trait. Does your dog have it?
By Tara Yarlagadda
Related Tags
Share: