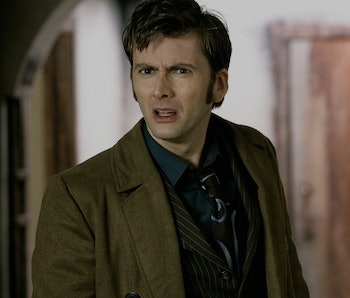 The Doctor never seems to get tired of people asking the age old question: “Doctor who?” He usually smirks and gets a satisfied little glint in his eye when a newly introduced character says such a thing. And while companions and others on the show typically refer to him as “The Doctor” after getting to know him, there are those who — for good reason — still call him “Dr. Who.”

Few things are more entertaining than a “who’s on first” kind of situation on the long-running Doctor Who. It’s a way for the show to break the fourth wall and get a laugh from its audience. More often than not, when introducing himself as “The Doctor,” he’ll get a confounded “Doctor who?” in response. Season 6 of Doctor Who with Matt Smith’s Eleventh Doctor dubbed it “the first question, the oldest question in the universe, hidden in plain sight.”

The Eleventh Doctor’s journey surrounding the Question ended on Trenzalore with him being granted a new regeneration cycle. And so the story moved on. But the great debate hasn’t, and it probably never will.

Here’s the IRL question: Is the main character of Doctor Who called “The Doctor” or “Doctor Who”?

It’s a surprisingly complicated question. While the Doctor has always called himself “The Doctor” in the show, the first four actors to play the legendary Time Lord were credited in the original Doctor Who series as “Doctor Who” or “Dr. Who.” And Christopher Eccleston’s Ninth Doctor was credited as “Doctor Who” in the reboot. It wasn’t until David Tennant stepped into the role and requested he be credited as “The Doctor” that the credit changed.

Even the current Doctor, Peter Capaldi, calls himself “Doctor Who” in interviews despite being credited as “The Doctor.” And that most likely has to do with his having experienced the character and the culture surrounding the Doctor far earlier than his most recent predecessors.

There’s true legitimacy for both sides of the argument.

When Tom Baker’s Fourth Doctor — credited as “Dr. Who” — regenerated at the end of the 18th season of the show, Peter Davison’s Fifth Doctor was officially credited as “The Doctor,” and the title lasted from thereon out (except for that brief, confusing credit stint Eccleston had).

But the most confounding thing about those credits is that the Doctor had been referred to as just that — the Doctor — in-universe since William Hartnell appeared in the original series’s first episode.

All-in-all, the name-in-the-credits debacle is most likely due to the mysterious origins of the character. When the original series started, we didn’t know that the Doctor was a Time Lord from Gallifrey, which (in modern times) is the core to everything about him: the two hearts, the regeneration, the crushing guilt. So he was literally “Doctor Who?” Audiences didn’t know anything about this weird, space- and time-traveling alien man, so the actors were credited as “Doctor Who.”

Also keep in mind that the show was originally aimed at children. Today, the show is more family-oriented (though, most recently, it’s gotten kinda dark to be much of a family show). The “who’s on first”-type confusion is a fun game for kids (and, really, everyone) to play. It’s a thing the general public likes to make fun of because, admittedly, it is confusing, though not as confusing as the show itself.

But the good news here — and the most simple thing about all of this — is that, no matter what side of the battle line you fall on, you’re right! Congratulations on being right.

More like this
Entertainment
5.8.2022 2:52 PM
The new Doctor Who is a historic first for the sci-fi series
By Ryan Britt
Science
5.10.2022 1:00 PM
Scientists rank the 8 best movie time machines of all time
By Becca Caddy
Entertainment
5.9.2022 2:00 PM
In 'The Time Traveler's Wife,' Steven Moffat comes full circle
By Dais Johnston
Related Tags
Share: