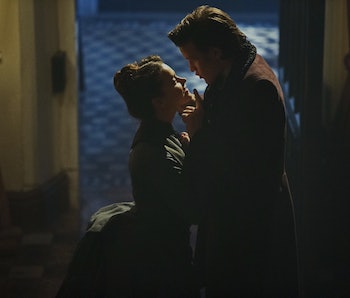 Clara Oswald was always the Eleventh Doctor’s “Impossible Girl,” a mystery to be solved “wrapped in an enigma, squeezed into a skirt that’s just a little bit too … tight.” And according to the Eleventh Doctor himself, she was also his girlfriend.

Matt Smith, Jenna Coleman, and Alex Kingston sat on the Doctor Who “Tales From The Tardis” reunion panel at New York Comic-Con on October 6 to answer some fan questions. And Matt Smith ended up answering way more than anyone expected.

“It’s always awkward to choose between your wife and your girlfriend,” he reportedly said. His “wife,” of course, is Kingston’s River, making his “girlfriend” Coleman’s Clara.

But Eleven died. Eleven was replaced by Twelve, a much older version of the Doctor than we’ve seen in a long time and a Doctor with a personality far removed from Clara’s beloved Eleven.

If Clara and Eleven really were in a relationship, then imagine how Clara felt when — after begging with the Time Lords on Trenzalore to save the Doctor’s life — she was confronted with Peter Capaldi’s post-regeneration trauma and manic behavior. She was so upset by the regeneration that she planned on leaving Twelve to his own devices because she didn’t trust who he was. We imagine that she probably felt quite a bit of disdain for him at first.

The only thing that makes her stay with Twelve is a call from Eleven, asking her to look after his new regeneration. The overtones of their call are clearly loving in nature, and when Clara hangs up with Eleven, Twelve laments, “You can’t see me, can you?”

It’s all very Rose/Nine/Ten if you ask us. Remember how hard a time Rose had accepting Ten — who turned out to be the great love of her life. Not to say that Twelve and Clara fell in love in any way but Doctor Who certainly has a way of using regeneration as a plot point to tear love — and our hearts — apart.