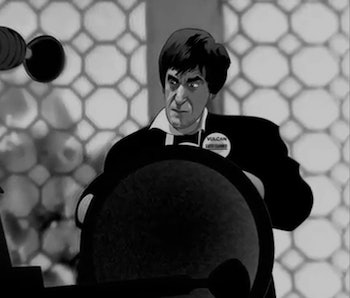 After the Doctor defeated the Cybermen residing on Earth’s twin planet Mondas, he regenerated for the first time and then zipped off to the planet Vulcan to fight the Daleks. It all went down in Doctor Who’s newly restored serial: “The Power of the Daleks.”

Even for contemporary Doctor Who fans, the description above might sound pretty weird, mostly because it sounds like a mash-up of Star Trek and Doctor Who, but it’s not. The legit first adventure featuring Patrick Troughton’s 2nd Doctor in 1966 featured a planet called “Vulcan” and it has nothing to do Spock’s home at all. And, in November, you can catch this entire adventure in a newly-restored animated form in movie theaters across America.

BBC America will release “The Power of the Daleks” theatrically for one night only on November 14. This follows a partial and similar 2013 animated restoration of the 1966 Who serial “The Tenth Planet” in which William Hartnell’s 1st Doctor made his last appearance, an episode that was previously unwatchable after its initial air date since the majority of the tapes were erased by the BBC sometime in the ‘60s or ‘70s.

In 2013, the animated version of “The Tenth Planet”‘s last chapter restored the final moments of the 1st Doctor, and the new forthcoming restoration — “The Power of the Daleks” — picks up right where that one left off. The Doctor has regenerated for the first time even though back then, he just called it “renewal.” After not telling his companions Ben and Polly that he totally is the Doctor, they all fly over to “the Planet Vulcan” where they immediately get involved in a murder mystery.

Unlike the “The Tenth Planet,” in which only the fourth chapter of the story was lost, “The Power of the Daleks” is a restoration of an entire six-part serial. In those days, Doctor Who installments were 25 minutes a piece, which makes the new animated “The Power of the Daleks” somewhere around 150 minutes; pretty much a “new” Doctor Who movie. Here, we see the origins of the flippant way the Doctor could regard his human friends in the moments after he regenerated into a new body. Patrick Troughton’s Doctor has often been described as “impish” but in his first appearance, he’s also downright bratty, which makes turning him into a cartoon strangely appropriate. Though the character is undeniably a hero, it wouldn’t be until the introduction of Jon Pertwee’s 3rd Doctor that Doctor Who would give us a more overtly and kind and gallant Time Lord hero.

Doctor Who: The Power of the Daleks will debut on BBC America on November 19 following its theatrical debut on the November 14. Tickets go on sale for on October 14.