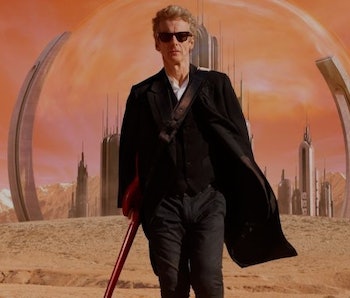 After the Doctor’s memory was erased in the Doctor Who Season 9 finale “Hell Bent,” the last Time Lord no longer remembers anything about his adventures with Clara Oswald. But because a selective memory erasure seems impossible, the Doctor must now be a total amnesiac. If his memories of Clara memories were connected to other memories, then the 12th Doctor has been effectively turned back to the 11th.

You could argue that prior to this memory wipe, the Doctor has been aware of the existence of Clara going all the way back to the seventh season episode “Asylum of the Daleks.” That’s when the 11th Doctor encountered Clara inside a Dalek, known as “Oswin.” If all of his memories of Clara have truly been erased, then this connection would be gone too. In his new perception, he’d just think of Clara/Oswin as a mysterious voice and a tragic person who didn’t know she was turned into a killer mutant cyborg.

But things get tricky after that, in fact, the entire “impossible girl” storyline in which Clara’s personality fragments and manifests itself throughout the Doctor’s entire timeline is really hard to reconcile with this memory loss. In “The Name of the Doctor,” we even see Clara advise the very 1st Doctor on which TARDIS to seal. Has he forgotten that now, too?

To be fair, the idea of multiple Claras populating the Doctor’s whole timeline was a retroactive idea to begin with, meaning that having that aspect of his past now “erased” from his mind isn’t that big of a deal. But more recent history is important. Arguably, Clara taught both the 11th and 12th Doctor super-duper life lessons. She’s even the reason why the 10th, 11th, and War Doctors don’t BLOW UP FREAKING GALLIFREY in “The Day of the Doctor.” Clara helped the 11th Doctor overcome his depression over losing Amy and Rory and transitioned the 12th Doctor out of a grumpy stupor. Where is he now, emotionally?

Sure, the final scenes of “Hell Bent” imply the Doctor has a latent memory of Clara’s positive impact on his psyche. Still, does he now not remember Missy, the new version of the Master? Danny Pink? Anything about what happened during his ordeal in “Heaven Sent?” It seems like there will be triggers for this kind of thing all around him. As Doctor Who has demonstrated over and over again, these memory erasures aren’t exactly foolproof, and little triggers can bring everything back pretty easily.

When the 10th Doctor erased Donna’s memory in “Journey’s End” it was pretty easy for him to keep himself away from Donna. But how will the 12th Doctor keep himself away from things that will remind him of Clara? So far, other than Class, the only post-memory erasure version of the Doctor we’ve seen was in “The Husbands of River Song.” Because he’s mostly just interacting with River in that story, we’re effectively seeing a version of the 12th Doctor who was in his mind just very recently the 11th Doctor.

Still, does the Doctor even need a memory wipe to forget really important stuff? Since the beginning of Peter Capaldi’s tenure, it’s been suggested he doesn’t remember lots of stuff, mostly because he’s now thousands of years old. In “Deep Breath,” he forgets the existence of the clockwork robots from “The Girl in the Fireplace” all on his own. This isn’t a mistake either; we’re supposed to understand he’s forgotten it. Either way, this kind of forgetfulness combined with the specific memory wipe can paint a picture of a crazy person, which, oddly, creates a narrative blank slate.

Discussions about the impending 10th season of Doctor Who have suggested the show will get a brand new start, meaning the Doctor’s memory erasure and forgetfulness may have been a bigger game changer than we thought. Could this be the first version of the character totally free from angst? If all of his memories connected to Clara are truly gone, the next version of Capaldi’s 12th Doctor could be the most upbeat in years. Just don’t expect him to start wearing bowties again.

More like this
Entertainment
Jan. 30, 2023
Doctor Who Could Become the New Marvel — But There's a Catch
By Ryan Britt
Entertainment
Feb. 4, 2023
The Last of Us Episode 4 trailer teases the entrance of Melanie Lynskey’s character
By Claire Fox
Culture
Feb. 2, 2023
Buck Rogers in the 25th Century’s Most Baffling Change Also Gave Us Its Best Character
By Ryan Britt
LEARN SOMETHING NEW EVERY DAY.
Related Tags
Share: