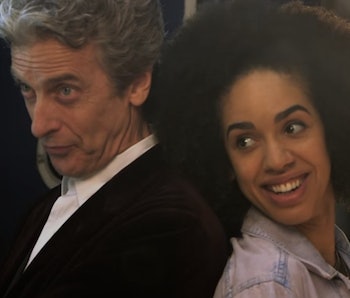 The 2017 new season of Doctor Who will basically be a brand-new show, as the entire universe will be reintroduced through the eyes of the new companion, Bill, played by charming newcomer Pearl Mackie.

At a New York Comic-Con panel on October 7, showrunner Steven Moffat, Pearl Mackie, and Peter Capaldi told the audience that the first episode of the new season of Doctor Who is like “Episode 1 of the entire show.” If you’ve never watched Doctor Who, you’re in luck: The show will be easy for you to handle. “If I gave you one word [for Season 10], it’s new,” Moffat said. “It’s brand new.”

Peter Capaldi attributed this newness as coming directly from Mackie herself, saying, “Pearl has come along with an individual take on the companion’s role.” This makes it sound like we’ll be seeing literally everything in the new season through Bill’s eyes, much in the same way audiences were reintroduced to Doctor Who back in 2005 with Billie Piper’s character, Rose Tyler.

Mackie made great pains to point out that Bill will be “introduced” to the world of the Doctor, and that she felt like her character was “fully formed” when she received the first script. In relation to how much she connected with the character Mackie said: “I think I know this girl!”

For her part, Pearl Mackie felt like her unfamiliarity with the Doctor Who universe is totally connected to her performance as Bill. In describing her own reaction to Capladi’s Doctor running around the TARDIS pressing buttons like an insane lunatic in space, she focused on how bizarre it was: “This is maddest thing that’s every happened to me,” she said. “Luckily the character was thinking that too.”

The panel did not reveal any new scenes with Bill, and she will not be seen in the new Christmas special: “The Return of Doctor Mysterio.” BUT, she will be joining the TARDIS along with Matt Lucas — in spring 2017 when Doctor Who returns for its all new Season 10.

More like this
Entertainment
8.1.2022 2:00 AM
Westworld Season 4 just copied one of the best Doctor Who episodes ever
By Ryan Britt
Entertainment
8.9.2022 1:00 PM
Has your favorite HBO Max show been canceled? The fate of 9 sci-fi series revealed
By Robin Bea
Entertainment
8.12.2022 4:04 PM
The Mandalorian Season 4 is coming sooner than expected
By Dais Johnston
Related Tags
Share: