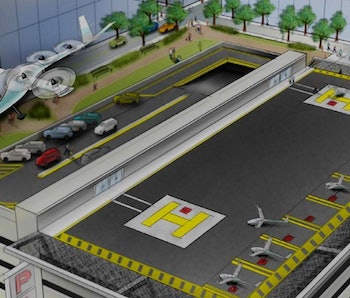 Uber released its super awesome flying car plan last Thursday, and the internet hated it. Admittedly, the internet hates everything, but it reserved special levels of vitriol for a company with the gall to present its 96-page research to the world. How dare it?

Popular Science slammed the company for choosing to use vertical take-off and landing (VTOL) vehicles, an area that’s seen limited success in the past, while Discover Magazine saw the company’s struggles with self-driving car manufacturers as a sign of things to come. Maxim simply described the idea as “crazy.”

I’m reminded of a New Yorker piece from November 2014:

Yes, it’s a car that can fly. Around the earth. In under an minute. Whoop-de-doo. Once you do that a couple dozen times, it’s like, “Fine, but what else you got?” Unfortunately, the answer is not a whole lot.

The tech industry has a tendency towards either detail-thin ideas that might never see sunlight, or immediately releasing something without warning. Magic Leap is still a mystery, but Microsoft’s bold Surface Studio dropped out of the sky suddenly last week. Uber’s plan sits somewhere between that: there’s plenty of details, but it won’t be ready for a while.

It’s true that Uber’s business model is undergoing some teething problems. Basically nobody owns a self-driving car, and nobody’s gonna have a VTOL in their backyard. The model of acting as a middleman is going to have to change, and the company will need to manage that transition. But that’s why roadmaps are important. If Uber wants to manage this transition, it needs to make its motives clear early on. Especially if those changes involve building landing pads everywhere.

It’s the same with other infrastructure-disrupting technologies: when Elon Musk released the plans for the Hyperloop, he received criticism that the plan was unworkable. Musk, of course, should have presented a fully costed proposal to the state of California that they could start building the following week.

The blogosphere has grown so accustomed to Surface Studios dropping on their laps that when a transport company makes its intentions known early because it’s, you know, planning to make some big changes to infrastructure, pundits throw up their arms and prattle on about how it’s oh-so-unworkable and we should just drop the plan now to save everyone the embarrassment. Instead, they should appreciate the fact that plans like these will need refinement, and these are the first steps.

Perhaps Uber overstepped its mark a little bit. I mean, it actually produced something researched with value, rather than a project to see if we’re living in The Matrix. But pushing for the bold and innovative should be applauded, not condemned, and our world would be far less interesting if people didn’t throw out some big ideas once in a while.