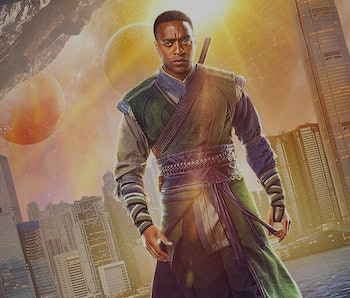 Marvel’s Doctor Strange will be releasing in theaters on November 4, and as the first film to explore Marvel’s mystical realms, the characters introduced in the film will each play a part in shaping the future of the Marvel Cinematic Universe. One such character is Baron Mordo, Doctor Strange’s lifelong arch-nemesis and a key player in the coming Marvel films.

Baron Mordo in the Marvel Comics

Baron Karl Amadeus Mordo, or just Baron Mordo, was created by Stan Lee and Steve Ditko back in Strange Tales #111, published August 1963. Originally, Mordo was created as a highly accomplished magician and Transylvanian nobleman who specialized in summoning demons. He originally learned black magic from the his grandfather, a magician of the dark arts. At the age of 18, Mordo was sent away from home to become the Ancient One’s original pupil in Tibet before Dr. Stephen Strange arrived to learn the mystic arts.

Eventually Mordo began plotting to kill the Ancient One. Recognizing Mordo’s threat, the Ancient One sought to train a magician that could be stronger than Mordo, that person being Stephen Strange. Together, Strange and the Ancient One defeated Mordo and expelled him from Tibet, setting the stage for Mordo and Strange’s lifelong antagonism.

After replacing Mordo as the Ancient One’s student, and eventually inheriting the title of Sorcerer Supreme, Baron Mordo vowed to one day defeat Strange, only to fail time-after-time. Mordo’s early characterization was littered with these “arch-nemesis” schemes-of-the-week type stories where Mordo would constantly try to sabotage Strange only to be foiled.

Mordo’s story would take an interesting turn once the ancient demon Dormammu was introduced, and the two would work together against Strange to greater effect. Together they managed to kidnap the Ancient One, and stand up to Strange’s superior mystical powers. Mordo, however, became somewhat of a lackey to Dormammu, even getting banished at one point once Dormammu stopped seeing Mordo as useful. This led Strange to seek help from other magicians against the demon, expanding Marvel’s roster of magicians that would work with Strange during his adventures.

After returning once Dormammu was defeated, Mordo formed a group known as the Circle Sinister with other evil magicians. Again, in what is a recurring theme for the villain, this group was also defeated by Strange.

Mordo’s character, despite being introduced as Strange’s primary rival, quickly became a fairly predictable villain who was naturally obsessed with defeating Strange. His storylines would involve either impersonating Strange, trying to steal Strange’s powers, or summoning Dormammu. It wasn’t until his character got cancer that Mordo’s character started branching in different directions. After a final, failed attempt to cure his cancer, Mordo trained his daughter, Astrid Mordo, in the mystic arts before returning to Tibet and asking for forgiveness from his former enemies. After getting that forgiveness, Mordo died.

In the 2016 Doctor Strange film, Baron Mordo is played by actor Chiwetel Ejiofor, with a significantly different origin story. Rather than a Transylvanian nobleman, Mordo is a master magician who helps train Strange when he first arrives in Tibet. Mordo even has a friendly relationship with the Ancient One, making him a key ally to Strange during his training. However, as the film progresses Mordo begins viewing Strange’s immense magical powers as a threat, causing a rift between Mordo and the Ancient One and complicating Mordo’s former heroism.

Marvel Cinematic Universe Producer Kevin Feige told comicbook.com that Mordo “is different in this movie. … The Ancient One doesn’t necessarily see the potential in Strange that Mordo does. Mordo’s the one who talks the Ancient One into allowing him in. For this film, he is a partner of Strange and he is a mentor to Strange.”

Both Feige and director Scott Derrickson revealed that they wanted to give depth to a character that, in the comics, has been simply portrayed as the typical arch-nemesis. The film is hoping to twist Mordo’s relationship with Strange and the Ancient One, making their rivalry layered in ways the comics failed to convey.

While it’s already been revealed that Mordo in the film will eventually turn against Strange, the closeness in their original relationship should give his character more nuance and hopefully more depth once he actually becomes a full villain in the MCU.

While Baron Mordo is canonically deceased in the comics (at the moment), Mordo’s appearance in the film could give the character new life. Especially since it sounds like Mordo will be playing a larger role in future installments of the MCU, either in a possible Doctor Strange sequel, or an Avengers film.