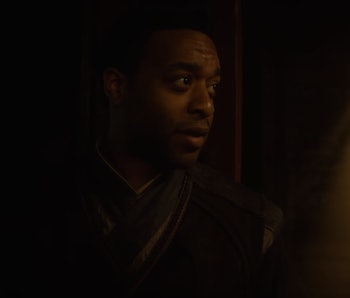 If the Marvel Cinematic Universe has any weakness, it’s the fact that you can count all of their memorable villains on one hand. Marvel’s newest director Scott Derrickson is having none of that, and is hoping to set up Baron Mordo as one of Marvel’s great baddies if everything goes according to plan in Doctor Strange.

In the comics, Doctor Stephen Strange’s arch-nemesis is Baron Mordo, a villain introduced in the very first issue. Mordo was a fellow student of Strange’s. The two studied magic together under The Ancient One. Unfortunately, after seeing Strange’s talent for magic, Mordo became increasingly jealous of Strange’s power and vowed to become his rival.

According to Derrickson, Mordo’s “arch-ness” was just too painful for the director, so with the casting of Chiwetel Ejiofor, Derrickson set out to create a villain that could overcome his early, lame origins, by first appearing as an ally.

“He is different in this movie. He is, as portrayed by Chiwetel, Strange’s advocate in the beginning of the movie. The Ancient One doesn’t necessarily see the potential in Strange that Mordo does… For this film, he is a partner of Strange and he is a mentor to Strange.”

Ultimately, if things go as planned, Mordo will be an interesting enough character that his eventual turn to villainy will break all of our hearts. The decision to elongate Mordo’s story will hopefully give his character the same benefits as Marvel’s other great villains like Loki, Kingpin, and Kilgrave, each of whom had extended character arcs that allowed audiences to connect with them on a deeper level.

Doctor Strange comes out on November 4.