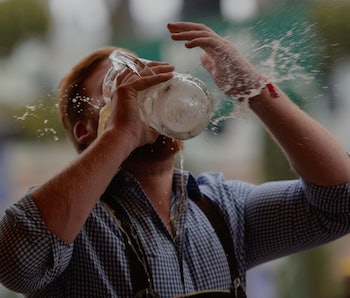 Drinkers rejoice: Researchers have created a wearable “tattoo” that can automatically check your blood alcohol levels by analyzing your sweat. This information is then sent to your smartphone, within eight minutes, offering an almost real-time glimpse into exactly how drunk you are. Vital data like this, if used appropriately, could eventually save lives.

The National Institute of Biomedical Imaging and Bioengineering (NIBIB), which helped fund the research, said Monday that the device is supposed to be “non-invasive and unseen by others” so its wearer can escape the judgment of their drinking partners. The device itself is just a few centimeters large, which means it can be hidden in something like a small and inoffensive, temporary tattoo.

It resembles a temporary tattoo, but is actually a biosensor patch that is embedded with several flexible wireless components,” said NIBIB’s Seila Selimovic. “One component releases a chemical that stimulates perspiration on the skin below the patch. Another component senses changes in the electrical current flowing through the generated sweat, which measures alcohol levels, and sends them to the user’s cell phone.”

Researchers hope devices like this will give people a better glimpse into how much alcohol is coursing through their veins, which is something people are historically bad at.

What’s also innovative about this technology, is that the wearer doesn’t need to be exercising or sweating already. The user can put on the patch, and within a few minutes get a reading that’s well correlated to his or her blood alcohol concentration. Such a device hasn’t been available until now,” says UC San Diego electrical engineering professor Patrick Mercier. The research was published in the journal ACS Sensors.

A study published in September, found that we tend to judge our own inebriation based on how drunk the people around us are, not on how much we’ve imbibed. Offering easier access to blood alcohol levels could mitigate this issue.

It’s an issue worth addressing. The Centers for Disease Control and Prevention says excessive drinking was responsible for 10 percent of deaths of working adults each year between 2006 and 2010. That’s 88,000 deaths and 2.5 million years of potential life lost each year for almost half a decade. Perhaps some of those lives could have been saved if people were better able to judge how much alcohol was affecting them.

“When you’re out at a party or at a bar, this sensor could send alerts to your phone to let you know how much you’ve been drinking,” says Jayoung Kim, a UC San Diego materials science and engineering PhD student, and one of the first co-authors on a paper about the technology.

This device is the latest attempt to make it easier to test someone’s sobriety. Companies are racing to create breathalyzers that can detect marijuana, a drug test that can detect cocaine use with naught but a fingerprint, and a mass spectrometer was shown off by University of Surrey researchers in 2015.

The technologies that enable this wearable “tattoo” are available today, but the researchers who created the device have yet to package it as a consumer product, or develop the companion app for smartphones. It’s not clear when the group plans to move beyond the research stage for the device — but given the amount of interest in the subject, it’s probably only a matter of time before this tech is available to the public.

If researchers are ever able to convince people to wear devices like these, the roads might be safer and the public could become healthier. But if those benefits aren’t motivation enough, consider this: Knowing how much alcohol you’ve had might also help you avoid hangovers. Since hangovers can’t be cured, it might be worth slapping on a wearable “tattoo” to avoid getting one in the first place.