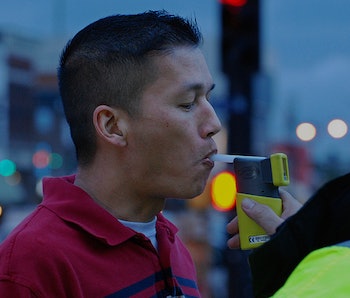 Don’t bogart that joint (for medicinal purposes and/or you’re a Colorado or Oregon resident). The depressing race to design and create a pot breathalyzer has begun.

Reuters reports that a Canadian-based company called Cannabix Technologies has already developed a patent-pending prototype that’s in the testing phase, which makes us wonder who the test subjects are and how can we become one. Bonus points for the hilarious name. But, still, shit, guys. Way to harsh everyone’s buzz.

Others, like the U.S. company Lifeloc Technologies, are hoping to expand their line of devices that detect alcohol levels in the lucrative legal cannabis market with their own weed-alyzers.

They hope to get in the door — replacing the slow, expensive blood and urine tests — to detect marijuana use, but would still charge a ton for the new devices. The companies have estimated they could charge anywhere between $2,500 to $3,500 for a single weed-alyzer.

Then, laws will have to catch up. Police can’t quantify impairment in the same manner as alcohol, because we don’t know how much pot impairs functions such as driving. The Reuters post reports that a paper by the National Highway Traffic Safety Administration determined that cannabis does in fact impair basic motor skills, but further testing is required.

Instead, the new breathalyzers would simply function by detecting THC, the psychoactive ingredient in weed that gives you the giggles, the munchies, and an affinity for early Sublime records.

Any punishment would have to be determined from there. But until a company actually creates a consumer version, you’re free to smoke them, eat them, drink them, or do whatever it is you do with them if you got them, but only if you’re in the right frame of mind or state of the union.

More like this
Mind and Body
Jan. 24, 2023
Is alcohol bad for your health? Here's what the science actually says
By Katie MacBride
Science
11 hours ago
The Weirdest Sci-Fi Apocalypse on Netflix Reveals a Controversial Field of Medicine
By Tara Yarlagadda
Science
7 hours ago
An Upcoming Mission to the Dark Side of the Moon Could Radically Reshape Astronomy
By PAUL M. SUTTER and Universe Today
LEARN SOMETHING NEW EVERY DAY.
Related Tags
Share: