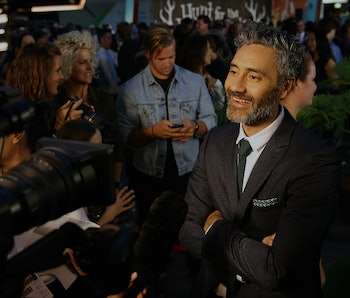 Taika Waititi, the Kiwi director in charge of Thor: Ragnarok, recently completed a Reddit AMA, and if there’s any takeaway, it’s that he doesn’t give a shit about the Marvel Cinematic Universe. That’s a good thing.

In a recent Reddit AMA, fans curious about the iconoclastic approach Waititi is taking with the character (‘80s logo, synth soundtrack) naturally had some questions about the character’s third feature film.

Waititi might be best known for his (really good) vampire comedy, What We Do in the Shadows and frequent collaborations with one-half of Flight of the Conchords Jermaine Clement. He’s now the man in charge of Thor’s greatest adventure yet, Thor: Ragnarok. “What tone will it have?”, “Is it similar to the other Thor movies?”, “It’s described as Thor’s Winter Soldier, is that true?”

To all those questions and more related to Thor’s place in the MCU, Waititi’s definitive answer was to defiantly shrug.

These kind of reassurances that Waititi is pursuing his own personal tone for the film continues throughout most of the AMA and is honestly very refreshing to see.

Marvel has been criticized, perhaps unfairly, that they sometimes force films to fit a general Marvel mold. James Gunn’s Guardians of the Galaxy and Shane Black’s Iron Man 3 buck that assumption to varying degrees of success. However, given that audiences already saw a deliriously hilarious Waititi-directed Thor adventure with the “Roommates” short, Waititi might really be making the craziest Marvel film to date.