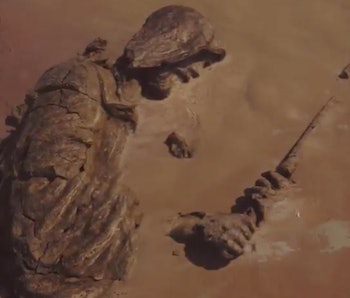 If you’ve seen the arrestingly exciting final Rogue One trailer, then you’ve probably been wondering about that beautiful fallen statue reminiscent of Obi-Wan Kenobi. Here’s everything we know about it.

The new (and final) Rogue One trailer revealed a lot more about the upcoming film, including the tone, a better look at Darth Vader, and fuller views of Jedha, the moon where the majority of the action will be taking place. Part of that view included harsh deserts and half the remains of a towering Jedi statue, which seems to have been taken out less by the sands of time and more by unfriendly fire.

“But why would there be a giant Jedi statue?” you may ask. Good question. Quick history lesson: Jedha — which is a brainchild of the Rogue One writers — is a place of spiritual significance for those who follow the ways of and believe in the Force. It’s a pilgrimage site. Keep in mind that the Force is a largely spiritual force, and that the Jedi are keepers of peace. Think of Jedha as a Star Wars version of Mecca or Jerusalem. And we see this in the trailer: slender, sand-swept streets, markets, worshippers everywhere, and a super-fun Jedi statue. As well as a not-so-subtle implication of war and tragedy overtaking the peace of a city based in worship, much like in our own world.

Jedha is also in the running as a possible location for the first Jedi temple — you know, the one Luke was looking for in The Force Awakens. Sure, there are other planets such as Ahch-To, Coruscant, Ossus, and Tython on that list too, but it’s interesting that we’re seeing Jedha right now. What makes Jedha such a singularly great option is that its abundance of kyber crystals was perfect for the construction of lightsabers, the weapon of choice for the Jedi.

Of course, Rogue One takes place after the fall of the Jedi Order, which means we probably won’t be seeing any Jedi (or lightsabers, unless you maybe count Vader’s) in action despite the strong spiritual overtones of the new trailer. We imagine that Jedha has undergone a pretty heavy siege by the Empire since the fall of the Jedi and the Republic, but the planet’s spirituality is still clearly prominent.

Jedha’s lingering religion culminates in the trailer’s image of the fallen Jedi master holding a shattered lightsaber (can you say “symbolism?”). As mentioned, although the statue shares a striking resemblance to Obi-Wan Kenobi, it’s probably not him. Beards are pretty common amongst Jedi. But it certainly brings to mind the theory of Eternal Recurrence, which states that the universe is constantly repeating all existence and energy across infinite time and space. Obi-Wan, who, during Rogue One, is still hiding out on Tatooine to keep an eye on Luke Skywalker, shares a resemblance with some ancient Jedi master who was important enough that the Jedi Knights made a towering stone statue of him — perhaps — thousands of years ago. We think that’s pretty dope, and that it definitely points to how important recurring themes are in the Star Wars universe.

Catch Rogue One in theaters on December 16.