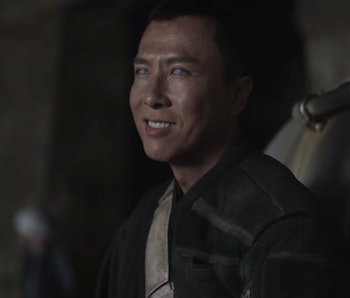 If you thought Rogue One was going to be a dark and down-in-the-dumps and violent movie, the final trailer for the impending Star Wars spin-off is giving us one thing its previous trailers haven’t: lots of people smiling triumphantly.

With a decidedly up-beat musical score and an overtly optimistic tone, the new Rogue One trailer seems almost like a recruitment video for the Rebellion itself. Words like “dream” and “hope” pervade this trailer, leading one to think this film may end up being the lightest Star Wars film to date, instead of the “darkest.” Mostly because everything in this trailer is so clear-cut: Jyn’s dad isn’t really a bad guy, he just bamboozled into making a super-weapon because of evil Imperial manipulation. He loves Jyn, and she loves him. Everyone in Jyn’s Rebel squad is plucky and likable and they all grin constantly. Even the scene where Bodhi Rook invents the callsign of “Rogue One” comes across as really cute.

This isn’t to say that Rogue One won’t still be “gritty” or “violent,” just that it feels like there won’t be much moral ambiguity, even among the bad guys.

Seeing Vader actually converse with Orson Krennic in this trailer just makes you love to hate Orson Krennic. We see him betray Jyn’s father in this trailer, and now he’s trying to stand up to Vader. Let’s take this guy down! Here, we’ve got a microcosm of the entire tone of the trailer: it’s like cheerleading for the movie itself. Chirrut Îmwe is helping us Zen-out with the Force, while Jyn assures us everything will be okay if we just try hard enough.

All of this could point to a predictable plot for Rogue One: the good guys triumph and Darth Vader schools some lackey in deliciously badass style. But, the broad strokes of the plot were fairly clear from the first trailer. This new one, it seems, is here to assure everyone — and lighthearted Star Wars fans in particular — that everything is going to be okay as long as we have a little faith.