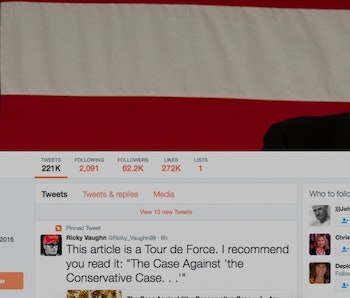 Twitter, a popular place to exchange ideas and waste time on the web, is also a hotbed for the alt-right. And, on Wednesday night, one of their own was banned for as-yet unknown reasons.

The account in question, @Ricky_Vaughn99, which naturally belongs to Ricky Vaughn, was a prominent and vocal supporter of Donald Trump with more than 60,000 followers.

Vaughn’s recent tweets, according to screenshots snagged by the alt-right website Magafeed, weren’t great, but they didn’t seem extraordinarily terrible or offensive either. They were just your typical pro-Trump tweets regarding the recent vice presidential debate, which sure, some might call terrible and offensive.

According to his Gab and Facebook accounts, Vaughn doesn’t know why he’s been suspended, nor has he received an email from Twitter about it.

His suspension comes a few months after Twitter permanently banned notorious alt-right “tech reporter” and hatemonger, Milo Yiannopoulos. But Yiannopoulos’s ban was a direct response to his personal abuse toward Ghostbusters star Leslie Jones, and Twitter has yet to cite any specific reason for Vaughn’s ban.

Twitter is, to put it mildly, not great at reacting to abuse or suspending accounts that regularly harass other users, so it’s a mystery why Vaughn’s distasteful but unextraordinary tweets got Twitter’s attention.

Inverse emailed Twitter asking for a comment, and will update this story if we hear from them.

The hashtag #FreeRicky became a top trend on Wednesday night, as many members of the alt-right feared that Twitter targeted Vaughn just because his politics went against theirs.

It’s an understandable fear, even if most of the people tweeting the hashtag don’t quite seem to understand exactly what “free speech” means when you’re dealing with a private company like Twitter.