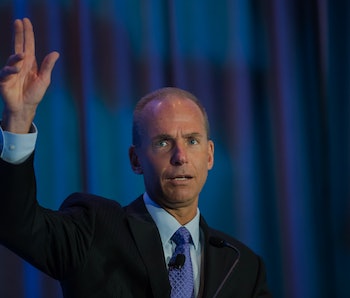 Boeing top dog Dennis Muilenburg just issued a public challenge to SpaceX CEO Elon Musk: On Tuesday, Muilenburg told an audience at The Atlantic’s “What’s Next?” conference that “the first person to step foot on Mars will arrive there riding on a Boeing rocket.” That Boeing rocket would be NASA’s Space Launch System. Musk, who last week presented SpaceX’s plan to begin colonizing Mars within the next decade, would disagree. Much is at stake: Whoever wins will literally change humanity forever.

The “What’s Next?” conference itself was sponsored by Boeing, which perhaps means this was a planned publicity stunt. Muilenburg is chairman, president, and CEO of Boeing, and he’s probably eager to pull some attention away from Musk’s ever-increasing online presence. With his challenge, he’s succeeded: The race to Mars is on, and Boeing is pitting itself as SpaceX’s top competition. (Jeff Bezos, CEO of Blue Origin, is probably seething, as his company is also eyeing the red planet.)

The numbers, however, don’t exactly agree. Boeing wants to send humans on a rocket to Mars in the 2030s, whereas Musk’s confident that SpaceX will do so in 2024 or ‘25. Musk’s plan is comprehensive, and his company appears to be chipping away at each phase. SpaceX is already landing rockets for reuse, which is integral to its plan’s success, and its next rocket, dubbed the Heart of Gold — the one that will get humans to Mars (but not back) — is well underway. SpaceX is already test-firing Heart of Gold’s engines, though five major obstacles remain.

Boeing outlined its own “path to Mars” nearly two years ago. In a Boeing-produced short film, Mike Raftery, then-director of Boeing’s Space Exploration Systems, says, “Mars is probably in the mid-2030s and so what we need to do now are proving ground missions to get us ready for Mars.”

He notes that Boeing was building the SLS, short for [Space Launch System](https://www.nasa.gov/exploration/systems/sls/index.html, the rocket, and Orion spacecraft that NASA will send to Mars. “To get you into a high orbit and it’s going to take us probably five or six SLS launches to do the Mars mission.”

But Muilenburg is evidently unfazed. His company plans on sending humans into space (as a requisite first step for the Mars journey) in 2018. If that mission succeeds, the plot will thicken. Until then, Muilenburg can lose sleep knowing that Musk (and Bezos) are making significant progress each day.