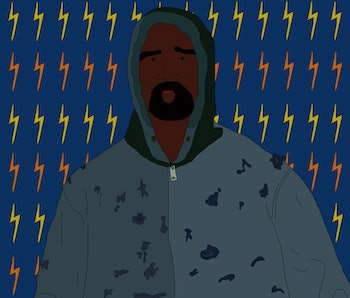 Stephanie Maslansky, the costume designer on Marvel’s Defenders shows, says each TV series is meant to be an homage to the comic books they were inspired by. “The thought that’s foremost in my mind is always making an homage to the comics,” Maslansky says. “We’re here for these comic book fans, its for them that were doing all this. We don’t want to reinvent the wheel, we want to honor the wheel.”

Maslansky described the hidden homages to comic books that she and her team worked into Luke Cage while on the phone with Inverse. She says the series is full of tiny, important details, from Luke’s bullethole-ridden hoodie, which becomes a defiant fashion statement in Marvel’s Harlem, to Cottonmouth’s small touches of green.

The bullet-holes were created, rather than simply shooting a gun at a sweatshirt, by a team of costumers and post-production CGI artists. “First, you have to decide where the holes are going to appear. You mark up the sweatshirt and put little red X’s where the holes are going to be. Our wardrobe person carefully cuts small holes, and the SFX people create squibs. Every single time there’s a bullet hole, those blow the hole a little bigger. The VFX team has to add the gun powder and the jagged edge of the bullet-hole. There’s a lot of different people bringing elements to that party. The editing team has to time the explosion to the sound and sync it to the visual change in the hoodie. It’s an exercise in timing and cooperation,” Maslansky says.

Luke Cage was also an exercise in restraint, as Maslansky’s team had to learn to balance iconic, bombastic comic book costumes with their version of Harlem. “When I designed Kilgrave’s look [on Jessica Jones], we kept him in shades of purple. Keeping Cottonmouth in green would have been too exaggerated, but we made sure he always had emerald earrings, or the emerald tie pin, or a green pocket kerchief.” Maslansky notes that in his first onscreen appearance, Cottonmouth is actually wearing a dark green suit, though the color is made less obvious by the flashing lights in his club.

Misty Knight (Simone Missick) on Luke Cage is another example of Maslansky and her team’s measured dedication to source material. Misty doesn’t look like her comic book namesake until her final scene in the series, but Maslansky says that one shot was very important to the crew. “When I read the script for the 13th episode, I thought, ‘Hm, how are we going to make Misty look different? Let’s go right back to the source material, give the fans an easter egg and have her really look like that character from the comics.’ Although the aesthetic comes from Blaxploitation movies, it is a really hot look. Leather pants tucked into tall boots… I wanted to find a top that had that interesting cold-shoulder shape in red, but we couldnt find it anywhere. We finally found a similar top in a cream color and had to dye it red. We were really afraid that it wouldnt work out.”

Although Maslanky and her team had fun styling Marvel’s version of Harlem, she says she’s not too concerned with Luke Cage blending visually into the rest of the Netflix Defenders shows. “They all look authentic and real to me,” she says. “One of the things these characters have in common, these first three — Daredevil, Luke, and Jessica — they really don’t want to be noticed. They don’t want to stand out in a crowd, and they all struggle with their identities and their heroism, with what they’ve found themselves doing. Nobody’s out there wearing neon colors and signs that say ‘look at me.’ What makes them authentic is the fact that they struggle.”

Maslansky says Luke Cage was a critical and commercial success for many reasons, but one of the facets of the show’s positive reception had to do with costuming and set design. She’s not wrong. “The natural light in Harlem, the lighting in the club, the lighting in the barber shop, you’ll notice all those colors are rich, though they’re muted. We did a lot of flashbacks, too. The show goes back to the ‘80s, sometimes the late ‘70s, sometimes the early ‘90s, and helping to design that let us unify a period look. I love those flashbacks and origin stories for that reason. Every single character on Luke Cage is so human. They’re all humanized through detail.”