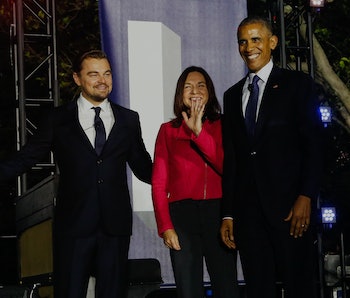 The White House hosted the civic engagement festival South by South Lawn on Monday, and the highlight was certainly President Barack Obama’s conversation with Leonardo DiCaprio about combating climate change. Though Obama stressed the dire consequences of unchecked climate change, he said there’s reason to hope and keep trying to be better. We’ve done things of this nature before — that’s why you don’t see psychedelic smog sunsets anymore.

DiCaprio, who was there to interview the president and climate scientist Dr. Katharine Hayhoe ahead of the U.S. premiere of his documentary, Before the Flood, started the hour off by asking Obama what letter grade he’d give the world’s efforts to fight climate change.

“We can still pass the course if we make some good decisions now,” Obama said, before recounting some past examples of small but important steps in the right direction.

“In 1979, I still remember the sunsets were spectacular. I mean, they were just these amazing colors,” Obama recalled. “I’d never seen them before because I was coming from Hawaii.”

When he mentioned the vivid sunsets to a mainland friend, the president was quickly corrected. “‘Well that’s all smog, man,’” Obama was told. “It’s creating this psychedelic stuff that’s normally not seen in nature because the light’s getting filtered in all sorts of weird ways.”

However, Obama said, thanks to mandatory technologies like the emissions-controlling catalytic converter and “really rigorous standards,” the smog around Los Angeles is significantly better than it used to be

Obama also described how the Clean Air Act “essentially set up the equivalent of a cap and trade system,” that helped end the acid rain epidemic caused by sulfur dioxide emissions from northeastern industrial plants.

“Most of you don’t hear much about acid rain anymore, even though it was huge news 25-30 years ago, because we fixed it,” Obama said.

Despite past successes — or at least proof of concept — Obama noted that taking action to combat a vague, seemingly far-off problem like climate change is going to be hard. Especially since “the natural inclination of political systems is to push that stuff off as much as possible.”

Incentives, along with needed technological breakthroughs, can help stave off the worst of climate change’s effects, assuming America and the rest of the world get our act together.

Obama stressed the importance of trying and compromising, even if there isn’t a sure fix. “Better is not going to save the planet,” Obama said, “but if we get enough better, that’s ultimately how we end up solving this problem.”

DiCaprio, for the most part stuck to asking questions, but earlier in the evening he fired what seemed to be a shot at Donald Trump, who has claimed that climate change was a myth created by the Chinese.