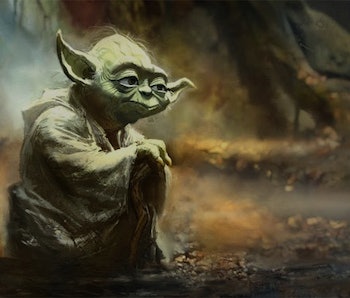 Instead of chilling in the afterlife with Anakin and Obi-Wan as a shimmering Force ghost, Yoda might make an appearance in the flesh in Star Wars: Episode VIII.

“In the flesh” is the same thing as “in the form of a puppet,” right? Maybe not. A Reddit user attended Star Wars Celebration in Europe and said there was a conversation with a Yoda puppeteer while in one of the booths, leading us to believe that Yoda will return — one way or another — for the as-yet-untitled Episode VIII.

“He looked at both of us, and said that members of the original Yoda team have been called in to work on episode 8, using the Yoda 8 puppet,” skywalkergal wrote. “He’d have no reason to lie.”

He certainly wouldn’t have a reason to lie. Though this is only a rumor scuttling around in the dark corners of the internet like something in the mists of Dagobah, we’re totally excited for the possible return of a puppet-style Yoda.

Now we just have to figure out how it is Yoda will appear in Episode VIII. There’s no doubt that Yoda is deader than a doornail (an ancient, ancient doornail), but that wouldn’t stop Luke from having flashbacks or Rey from reaching out for help. Normal, non-ghost flashbacks are now a thing in Star Wars movies, apparently.

Yoda had a brief appearance in The Force Awakens as a disembodied voice in Rey’s mind, so there’s no doubt she’s curious about who it was rattling around in her brain. Perhaps he’ll be sending her visions of his past to help her on her journey toward mastering the Force.

After all, Rey’s new Master, Luke, certainly knows there’s no one better for a Jedi training session than good ol’ Master Yoda.