Zach Galifianakis had Presidential candidate Hillary Clinton on his talk show Between Two Ferns, and it was just as much of a beautiful disaster as you would expect. From Clinton’s title card, “Hillary Clinton, had pneumonia,” to Galifianakis asking Clinton how to stay in touch (“What’s the best way to reach you? Email?”), the video on Funny Or Die is guaranteed to make you snort and win Clinton additional millennial points.

“Are you excited to be the first girl president?” Galifianakis asked a stone-faced Clinton. “For a younger, younger generation you will also become their first white president, so that’s pretty cool, too.”

Clinton, for her part, stayed impressively deadpan throughout the entire “interview.” Between Two Ferns always manages to capture Galifianakis’s loveable, dumbass brand perfectly, and this time it also managed to show off a side of Clinton we rarely get to see: her sense of humor.

That is, after Galifianakis tried and failed to “scare” Clinton, only to be stopped by the Secret Service.

The vital topics they discussed included Clinton’s time as Secretary of State (“As secretary, how many words a minute could you type?” “How does Obama like his coffee?”)

There were, as to be expected, a fair share of Donald Trump jokes, which Clinton gladly accepted.

“When you see how well it works for Donald Trump, do you ever think to yourself, ‘Oh, I should be more racist?’” Galifianakis asked. He also suggested that Clinton will be the one to lead the civil war if Trump takes office.

“No, I wouldn’t take up arms,” Clinton responded smoothly. “I think that might be a little bit extreme.”

And we can’t forget the interview’s sponsor: a Trump campaign ad.

At one point, Clinton talked about the double standard of critiquing women’s fashion choices in public settings. She’s not sure what she’ll wear for the debates, but it did set up the best joke of the segment about Trump’s wardrobe.

Check out the video below to see what Galifianakis plans on being for Halloween (hint: it involves pantsuits). 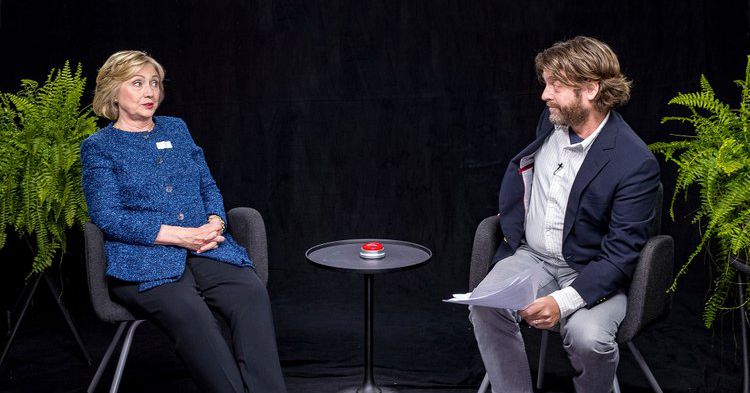