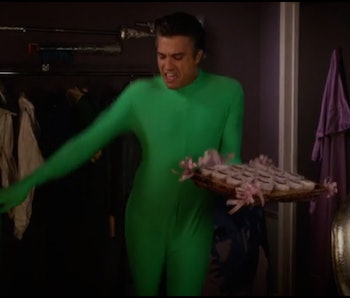 Slapstick comedy has always required the suggestion of pain. The Three Stooges poked each others’ eyes out; Lucille Ball drank enough Vitameatavegamin to get her sloppy drunk, and audiences ate up their performances as these performers made the uncomfortable look dynamic.

Slapstick may not be the most fashionable comedic tool — most sitcoms now rely on wit and banter to keep their audiences engaged — but quite a few performers from our screens would feel right at home alongside Buster Keaton.

Here are some of the best in the business today, or at least since talkies went to color.

We haven’t seen very much of actual Baskets performances in the pilot episode of his sitcom, but Zach Galifianakis playing a sad clown is sure to yield plenty of physical comedy. Galifianakis has long been an actor conscious of his body, and his use of physicality made films like The Hangover memorable. We’re lucky to have him on television again, doing his slightly rotund thing.

Most reviews of Rachel Bloom’s sitcom will focus on her voice, both as an actress and singer, but it would be a shame to overlook Bloom’s slapstick skills. The show — which has already won Emmys — has her pratfalling, jigging, and dancing with every song. She has the grace and is, likewise, a toolbox of manic, cartoonish facial expressions. Pure slapstick.

Modern Family may be eye-rollingly predictable now, but Ty Burrell’s turn as Phil Dunphy will go down as one of the greatest slapstick performances in television. He is one part Dick Van Dyke, one part Jim Carrey, and watching him wave his bendy, pale limbs around while trying to entertain his kids and placate his wife is always hilarious.

Jillian Bell shined on Workaholics, but she was still playing second fiddle to Adam DeVine, one of the most enigmatic comedians on television. In her new role on Idiotsitter, Bell gets to play her physicality for pure laughs, no longer restricted to being the deadpan executive assistant. She has all the presence of Chris Farley in Tommy Boy, playing a privileged, likable goofball ready to flip out at any moment.

Blake Anderson may be the empathetic mother duck, and Anders Holm may be the self-professed “cute one,” but Adam DeVine is the true breakout star of Workaholics, simply because it’s so funny to watch him experience pain. The scene in which ’Ders and Blake cut Adam down from a tree branch is a testament to their chemistry, but the way Adam is able to manipulate his face in panic afterward is nothing short of genius. It’s the perfect satirical take on bros: That they’re all just scared little boys inside.

When Broad City began, it seemed Abbi was going to take a backseat, playing straight-man to Ilana’s effortless cool, but as the show progressed, Abbi got the opportunity to inhabit her body on screen as a talented physical comedian. She is now easily the more gif-able character of the two.

Watching It’s Always Sunny in its 11th season, it’s hard to believe that the show began without DeVito, whose performance as Frank is so ridiculous that it’s often difficult to tear your eyes away from the screen. Part of the show’s comedy is watching what fresh hell the writers have decided to put him through on any given week. Regardless, the actor always seems game.

The Mindy Project has experienced many ups and downs — not least, its move to Hulu after being canceled — and it’s not a show that treats its minor characters with much respect. Morgan, however, is easily the second-most dependably funny character behind Mindy herself. Barinholtz has had to portray complete exhaustion, rage, childlike wonder, and fear from week to week, and it’s always interesting.

Peretti stands out on Brooklyn Nine-Nine, and considering it’s easily the best comedic ensemble on TV right now, that’s saying something. While she often plays a foil to Captain Holt, Peretti also gets a chance to rile up the other characters, especially Amy. In an unusual turn for a slapstick character, Gina Linetti never fails at anything. Instead of the usual sloppy, pratfall-prone character, she’s a woman with a huge onscreen presence to match her inflated ego. Also, she’s a dancer.

Critics love Jane the Virgin, but their starry-eyed adoration is typically reserved for the show’s leading lady. Camil, who plays Jane’s father, Rogelio, is the strongest comedian in the cast, and most of his performance just boils down to the way he carries himself. Like Brooklyn Nine-Nine’s Gina, Rogelio is at his best when he’s celebrating his own success.

Lo Truglio as Detective Boyle is the slapstick hero audiences deserve, after losing Jerry on Parks and Recreation. He’s obsessive, neurotic, perverted, and shows dauntless optimism in the face of a world that seems to hate him.

Also, the turkey costume he wore in the show’s Thanksgiving episode made for the funniest cold-open the show has ever done. Wasn’t this show supposed to be a vehicle for Andy Samberg?