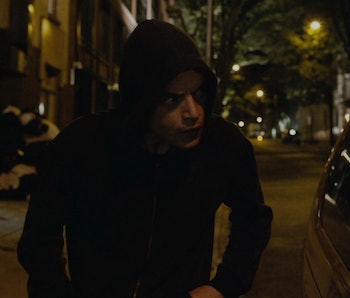 The second season finale of USA’s Mr. Robot aired on Wednesday, and because this is Mr. Robot we’re talking about, it was crazy as all hell and jam-packed with trippy twists, brutal fakeouts, and agonizing cliffhangers.

The biggest shock of the night was Elliot’s stand-off with his partner Tyrell. When Elliot decides to retake control from Mr. Robot and abort the plan, he comes to the conclusion — as many viewers did last week — that Tyrell isn’t real either. Turns out, he was mistaken. Tyrell shot Elliot in the chest, and as the screen faded to black and Mr. Robot seemingly flickered out of existence, it really seems like the protagonist might’ve just died.

The other big, shocking moment happened during Darlene and Dom’s interrogation room showdown. At first, Darlene seems like she just might get away with it, as far as these things go, but then Dom pulls out her trump card: a massive web suspects and persons of interests, and Elliot and Tyrell are at the center.

Then, after a cut-to-credits fakeout, we learn that Leon is still alive, asking Mobley and Trenton what time it is.

It was a lot to take in, and some fans on Twitter did not handle it all very well.

Capitalized swears and rage about the amount of time until season three airs were popular Twitter responses, but people also got excited about specific details that they did get to see. Like, for instance, confirmation that the Tyrelliot ship has some merit to it.

Others fans are too confused to be angry.

Finally, some people were shocked that Mr. Robot took a shot at their fellow USA show, Burn Notice.