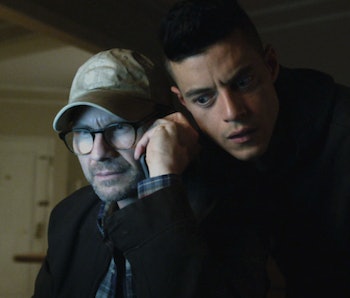 After a season of head fakes, vague suggestions, philosophical musings, and important deaths, the second season of Mr. Robot came to an end on Wednesday night. A few evenings after star Rami Malek won the Emmy for Best Actor in a Drama, his Elliot Alderson finally discovered the extent of the diabolical plans he made while in an unconscious state as Mr. Robot, and things got very complicated for his sister and co-conspirators. Without further ado, here’s your very spoiler-filled recap.

Elliot has basically no idea that White Rose, Dark Army, and Tyrell have been working with Mr. Robot (i.e., Elliot in his unconscious badass state) on some big crazy plan that requires blueprints for a building, an uninterruptible power supply, and a friggin’ ton of paper documents from Evil Corp. Turns out that Evil Corp has paper records of all the debt and other investments that fsociety thought it had deleted. That backup becomes the target of Stage Two, which is a fancy code name for blowing the building that holds all of those files to smithereens.

Oh, speaking Tyrell Wellick, he is…

Operating out of a warehouse set up by the Dark Army in a plan set up by Mr. Robot (unbeknownst to Elliot, of course). See above to understand why he hasn’t been spending much time reconnecting with Joanna.

Speaking of Tyrell’s wife Joanna (Stephanie Corneliussen), she finally confronts the man who has been sending her so many strange gifts: Scott Knowles (Brian Stokes Mitchell). He is not in a good place, to say the least. And it’s hard to blame him: Tyrell killed his wife, who was pregnant at the time. He’s drinking hard and breaks down when Joanna confronts him, telling her, “I wanted you to feel what I felt. I wanted to give you hope, that I could step on.”

She responds in typical Joanna fashion by calling him a pussy and saying that she was glad his wife was dead and child stillborn. Her strong words finally backfire when he beats her within a few inches of her life. 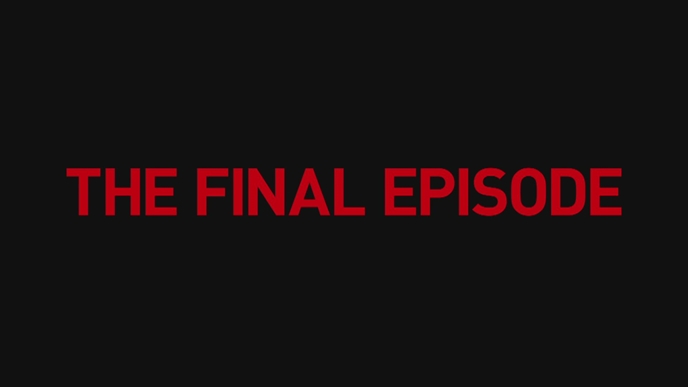 The two women go toe-to-toe in the questioning room; Darlene calls her bluff when Dom tries to buddy up to her. She gives a classic Darlene speech: “You act like you care, but that’s just it: An act. Which is sick and twisted. I’d rather you arrest me and throw me into jail. Let’s get some things straight: You will not get anything out of me, so why don’t you go read your manual and find the chapter on conniving c—ts who don’t give a fuck about you or your feelings and get back to me with some real tactics… If you want any other details, the answer is Suck A Dick.”

Unfortunately for Darlene, Dom has some goods: The fsociety home filmmaking suite, a certain bullet, and some testimony against her. With the upper hand, she tries the empathetic approach, telling Darlene that she’s only lasted this long on the case because she “has no life” and that Darlene is “a lot more special” than the young hacker thinks.

And so finally Darlene agrees to follow Dom to a back room, where she reveals the feds’ huge map of interconnected suspects and persons of interests, which has Elliot and Tyrell at its center.

And now back to Elliot

He loses it on Mr. Robot, angry that no matter what he does — drug overdoses, strict regimens, etc., he can’t get rid of his dark, Fight Club-esque alter ego. He finally tries to take control of the situation, hijacking the computer from Tyrell, who just so happens to be carrying a gun as insurance for such a situation.

“We’re supposed to be gods together, and yet you’re destroying our destiny,” he tells Elliot, his loaded gun aimed squarely at Elliot’s chest. “You’re not making sense.”

Elliot tries to call his bluff, suddenly under the impression that Tyrell is yet another one of his alter-egos. Unfortunately, he learns the hard way — a bullet to the gut — that he was overestimating his imagination.

He’s still kicking, somewhere in seclusion with Mobley and Trenton. Not quite sure what’s going on there!

More like this
Culture
8.5.2022 10:30 AM
How Netflix's epic Sandman finale sets up Season 2
By Mónica Marie Zorrilla
Entertainment
8.6.2022 1:30 PM
The Mandalorian Season 3 could bring this video game character to live-action
By Dais Johnston
Entertainment
8.4.2022 7:32 PM
Andor showrunner reveals when a beloved Rogue One character will appear
By Dais Johnston
Related Tags
Share: