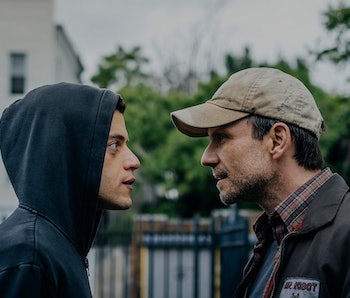 Mr. Robot has managed to nail depictions of both hacking and mental illness, two concepts that are often woefully misrepresented on screen. But while bad movie hacking is just cheesy, bad information on mental health in pop culture products can be outright harmful.

Creator Sam Esmail credits consulting with a psychologist in order to accurately portray Elliot’s dissociative identity disorder (DID), as well as personal experiences with anxiety and addiction. From the beginning, viewers with experience with [depression, social anxiety, addiction, and even autism have praised the show’s sensation of authenticity. Mr. Robot places the viewer almost entirely in Elliot’s reality. Indeed, on of the most accurate parts of the character is the whole mixture of issues, from social anxiety to drug use to insomnia, that feed into each other and augment the eventual reveal that Elliot is suffering from DID.

Dissociative identity disorder, previously called multiple personality disorder, is one of the most sensationalist and misunderstood mental disorders, often used in horror movies, as far back as the classic Psycho. Mental illness as a tool for building horror or suspense is often misinterpreted, or tinkered with to fit the narrative, and then slapped with a close-enough diagnosis. This is owed in part to evolving understanding of mental illnesses, and can sometimes be chalked up to the era. However, these missteps only further contribute to widespread misinformation and stigma.

Consider the dubious-looking trailer for Split, an upcoming horror film by M. Night Shyamalan. It might have a grain of truth, but it looks like mostly a dramatization and exploitation of a misunderstood illness to cast a mentally ill character as a terrifying monster.

In Mr. Robot, Elliot himself suffers from some misunderstanding of psychology, flippantly calling himself schizo early one, and fueling the viewers’ assumptions that he was suffering schizophrenia. Schizophrenia is, of course, a widely misunderstood disease that is commonly used in media due to its sensationalist aspects. While fictional stories have no technical obligation to be accurate, they have a huge influence on viewers’ perception. The eagerness of viewers to speculate and diagnose Elliot is indicative of how curious audiences are about mental health, but also inclined to get their information from fictional sources.

On the other hand, mental disorders are just as often played for comedy. DID was the focus of the 2009 show United States of Tara. United States of Tara received mixed criticism for its treatment of DID; it too consulted with an expert in the disorder, and was considered accurate in some aspects of how it developed Toni Collette’s alter egos. Some critics felt it was too sensationalist and devolved, over the three seasons, into using DID as an allegory for normalcy more than a reality.

Much rarer is a show like Mr. Robot, which depicts mental illness from the point of view of the character, in a way that is integral to the plot but not its sole driving force. Based on how the show has treated the issue thus far, there’s reason to remain optimistic that it won’t cheapen. This realism disorients and thrills viewers who can’t relate, and is authentic and recognizable to those who can. An anonymous essay “I Am Mr. Robot”, by a writer with DID, praises Mr. Robot’s “fantastic job of theatrically reproducing the experience of navigating interactions with dissociative ‘parts’.”

Both Split and United States of Tara utilize a single actor to play the roles of all the alters. This positions the viewer as an outsider to the character’s experience, and, intentionally or not, makes the story more about mental illness from the “normal” characters’ perspective. Toni Collette dressed in camo as a Buck or James McAvoy in a skirt are ploys that highlight the “craziness” of it. These stories become about how others deal with a mental ill character.

Instead, utilizing a different actor to present the alter as a fully distinct character, places Elliot’s perspective front and center. As the anonymous author of “I Am Mr. Robot* writes, “When you think about it, Elliot really is the only reliable narrator available.” Of course, casting a separate actor is necessary to pull of a twist or surprise reveal, but it also cleaves closer to a realistic depiction.

It’s easy to recognize the heavy influence of Fight Club on Mr. Robot, an influence which probably helped many viewers guess at the twist early on. The movie famously used two actors to create a dramatic reveal. But Fight Club’s ending, in which the narrator is “cured” by killing off his alter, dives into dramatization. Major psychology and psychiatry associations agree that DID cannot be cured in such a straightforward sense and therapy should focus on the integration of alters, or increased coping and cooperation between personalties, rather than one “defeating” the other, as in Fight Club.

In this light, Mr. Robot’s recent shaky truce between Elliot and Mr. Robot is a very healthy step for Elliot, and could indicate that the show will be moving past using the illness as its central drama. This is good news for viewers who feel that it would be cheap storytelling to use another similar twist or reveal another character to be an alter. It’s also good news for viewers who just want Elliot to catch a break. So far, Ray is being a pretty good therapist.

Mr. Robot is setting a new standard for depictions of mental illness; it even manages to use Elliot’s disorder for a dramatic plot twist without ending up exploitative. It’s hard to quite blame past inaccuracies in media for widespread misconceptions about mental health, when the medical community itself has a shaky history, but Mr. Robot is proving that creators can and should do better.