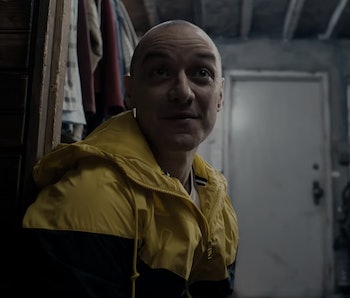 Count ‘em: There are 23 James McAvoys in the recently released trailer for Split, the latest film from once-celebrated thriller auteur M. Night Shyamalan. Plotwise, the film seems like fairly standard schizophrenia-horror fare until a voiceover shifts the conversation toward the pseudoscientific: “An individual with multiple personalities can change their body chemistry with their thoughts,” a therapist explains as McAvoy’s shirtless body is wrenched between personas. The whole thing may reek of bunk science, but mindfulness researchers, such as University of Calgary psychosocial oncologist Linda Carlson, Ph.D., warn against calling bullshit too quickly. The human brain is more powerful — and malleable — than we think.

“Personality is not a psychological disorder. It doesn’t really change that much through interventions.” Carlson tells Inverse, setting the record straight on the impossibility of brain-induced Shyamalan-scale changes in persona, especially in people with actual multiple personality disorder, a condition with questionable validity. “But psychological disorders, like mood disorders, anxiety disorders — all those things can be treated through mindfulness practice fairly well,” she continues.

Her research into the physiological effects of mindfulness meditation has produced evidence that “mind over matter” is not some empty yogic trope. Mindfulness — an increasingly popular practice in which people focus, non-judgmentally, on their present thoughts and environment — actually can change the chemical makeup of the body, she says, lending some credence to Shyamalan’s seemingly bogus premise. The practice has been shown, for example, to decrease the amounts of epinephrine, norepinephrine, and stress hormones like cortisol in the body by tweaking the HPA axis, the body’s command center for stress. It might even help slow cell aging, as Carlson’s 2014 paper on its role in maintaining telomere length in the journal Cancer demonstrated. Research on the mind-body connection is gaining legitimacy in modern medicine and has explored its therapeutic effects in treating psychological conditions from drug relapse to eating disorders. And much of it has been promising.

But it isn’t all powerful. “[Personality traits] aren’t very amenable to change, and they’re not necessarily linked to your body chemistry,” Carlson says. “The kinds of things that you can change are the way people feel in terms of how stressed they are. You can change how people accept what’s going on in their life, and what their moods are like.”

Meriah DeJoseph, a project coordinator at New York University’s Neuroscience and Education Lab, is also a cautious believer in the idea of mind over matter, having studied the ways mindfulness interventions in kids can protect against the harmful effects of stress on the growing brain. In particular, she’s tried to figure out how our thoughts can ultimately change matter. “Neuroplasticity is the main mechanism,” she told Inverse via e-mail, referring to the changes — spurred by our behavior, environment, thoughts, emotions, and learning — that take place at the level of our neurons. If you think about patterns of thought as roads in the brain, the paths most traveled will be the most well-maintained and the most familiar. Mindfulness, she says, strengthens the neurons in those circuits.

Agreeing with Carlson, DeJoseph also thinks mindfulness can be applied to change how we feel — and how we think about our feelings. People who undergo mindfulness-based stress reduction are better at regulating their moods, paying attention, and being aware of their thoughts and sensations, she says; they also think they’re more empathetic and more compassionate toward themselves and others. It’s even been shown to be helpful for patients dealing with mental illnesses, such as ADHD, bipolar disease, anxiety, and depression.

But can it manipulate mental illness? Here’s where Split veers from thriller territory into science fiction. In the film, McAvoy stars as a kidnapper with an extreme case of multiple personality disorder, manifesting in such alter egos as a creepy nine-year-old named Hedwig, a creepy schoolmarm, and a creepy, long-submerged psychopath prophesying the return of a thing called The Beast. His therapist’s discovery — that he can change his body’s chemical makeup using his mind — isn’t entirely wrong. As Carlson and DeJoseph continue to show, body chemistry can, in fact, be manipulated using the mind. Changing the levels of those chemicals could, feasibly, change his mood and even his long-term behavior. But suggesting those chemicals can somehow change his personality is where a line must be drawn. “Yeah, that’s not really very accurate,” Carlson laughs.