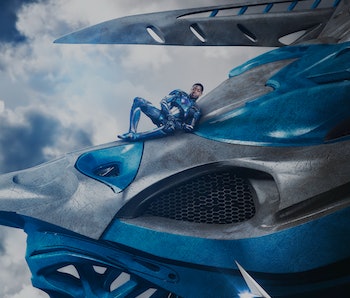 The superheroes of Angel Grove, the Mighty Morphin Power Rangers, are on their way to the big screen with a reboot movie, and in a batch of new posters, the Rangers pose atop their “Zords,” the colossal machines they pilot during battle. It’s our first look at the Rangers’s iconic artillery, and their alien design could mean a heavier story than what watchers of the kid’s TV series might expect.

After Michael Bay’s Transformers movies and Guillermo del Toro’s Pacific Rim, it seemed likely that the franchise-seeking Power Rangers from Lionsgate would emulate the alien designs of the robots in those films. But there’s an alien origin throughout Power Rangers’s design. Director Dean Israelite has said that the Rangers’ own power sets are of alien origin. In the original TV series, the powers come from magic instead of alien tech.

Like the character posters, the new Zord posters are coded to individual Rangers, each posing atop their signature machine. It’s way similar to Pacific Rim, but you have to see RJ Cyler as the Blue Ranger. Everyone else is trying to look cool, but the Blue Ranger is just straight-up chilling.

In case you’re trying to remember the individual Zords, because it’s been like twenty years, here’s a refresher: Zack the Black Ranger controls the Mastodon Zord; Kimberly the Pink Ranger pilots the Pterodactyl Zord; Billy the Blue Ranger has the Triceratops; Trini the Yellow Ranger drives the Sabre-Tooth Tiger; and Jason the Red Ranger controls the king of the dinosaurs, the Tyrannosaurus. Easy!

Power Rangers arrives in theaters March 24, 2017. The cast will be at New York Comic-Con for a panel, where it is expected footage will be revealed for the first time.