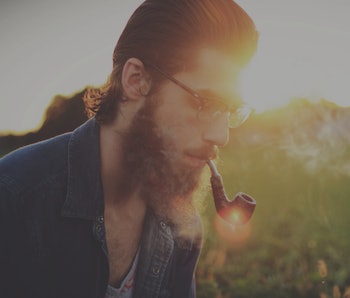 Unfortunately, for clean-shaven guys everywhere, hipsters with scraggly beards might be on to something. Centuries of ladies asking if a guy is hot or not has led to the development of secondary sexual traits in males hoping to get laid. Just as a couple of stags will rattle their antlers against each other to attract a female, human males have learned from female choice what will enhance their fertility and survival. And yep, science says one of those traits is a beard.

But beards have been something of a conundrum for scientists when considering attractiveness and romance. Previous studies have demonstrated that more masculine faces are preferred for short-term relationships, while less masculine are favored for the long-term. However, results from a new study published in Evolutionary Biology has found that men with beards are chosen by women over all other non-beard faces for long-term relationships.

The researchers behind this new study theorize that beards are essentially the visual representation of get you a man who can do both. Bearded guys are thought to be able to take care of the family and take care of business. As the researchers write:

“Our findings suggest that beardedness may be attractive when judging long-term relationships as a sign of intrasexual formidability and the potential to provide direct benefits to females. More generally, our results hint at a divergence of signalling function, which may result in a subtle trade-off in women’s preferences, for two highly sexually dimorphic androgen-dependent facial traits.”

The study tracked 8,520 heterosexual women who looked at computer graphic male faces that were morphed with various types of facial hair and subtly changed to look more masculine or more feminine. The graphics portrayed facial hair as either with light stubble, heavy stubble, full beards, or clean-shaven. As the appearance of the faces changed, the women were asked to rate them for general attractiveness and whether or not they would choose to have a short-term or long-term relationship with someone who looked that way.

So put down that razor, heterosexual guy looking for bae. If you keep that crumb-catcher clean, you may very well be on your way to extending your line’s longevity and some solid online dating props.

More like this
Science
7.2.2022 12:00 PM
Why is my cat scratching furniture? The answer might surprise you
By Tara Yarlagadda
Science
6.19.2022 1:00 PM
What is my dog thinking? Science may finally have an answer
By Tara Yarlagadda
Science
6.28.2022 10:00 AM
How are drugs absorbed in the body? The science of medicine, explained
By Tom Anchordoquy and The Conversation
Related Tags
Share: