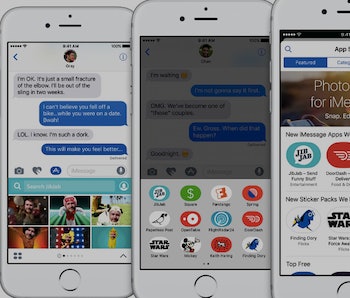 While Apple finally unveiled its new iPhone 7 and iPhone 7 plus Thursday, we’ll have to wait until September 13 to see the final version of iOS 10, the software on which the iPhone operates. Apple CEO Tim Cook calls the company’s “biggest iOS release ever.”

The big theme with iOS 10 seems to be a move toward customization and third-party developers. Siri will now be open to outside developers, which will allow users to do things like request an Uber using Siri and make reservations in a finally functional Apple Maps. Keeping up with Google Voice, Siri will now transcribe voicemails for you. Customizable widgets that can be accessed from swiping left on the lock screen will also be included in the new operating system, and all users will have to do to wake their phone is lift it.

Apple is hoping on the bots bandwagon by opening up iMessage to developers. Soon you won’t have to leave your text messaging to order food, send money, or shop. And if texting didn’t give you enough anxiety already, Apple is also adding features such as animated backgrounds and Snapchat-like emoji stickers. The emoji keyboard will be expanding to include more gender-diverse emojis.

“We’ve added even more intelligence into our keyboard with machine learning through contextual prediction,” Tim Cook told attendees at the event, though it remains yet to be seen what that actually means for users.

In a move to compete with Amazon’s Alexa, Apple is increasing its home-automation reach with a new “Home app” that will help user’s control affiliated smart-technologies (such as doorbells) with their Apple products.

Despite a flashy presentation at Wednesday’s “Special Event” in San Francisco, die-hard iPhone fans will be waiting to see if Apple has fixed the many bugs present in the iOS 10 beta system. Many users complained of the beta’s inability to work with Pokemon Go, a problem that has likely been solved now that Niantic is in bed with Apple.

The new mandatory jack-less Air Pods might be the least of users’ problems with a redesign that hides volume buttons in the control center.