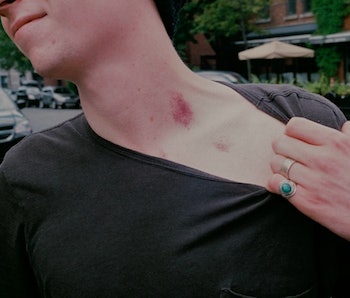 A 17-year-old boy has died after reportedly experiencing convulsions during dinner with his family in Iztapalapa, Mexico City. The website Info Noticias reported that the cause of Julio Macias Gonzalez’s death was a stroke, induced by a hickey from his girlfriend. Doctors believe that the hickey caused a blood clot, which then traveled to his brain.

Gonzalez’s case is the third documented instance of a hickey causing someone to have a stroke. In 2014, a 35-year-old Dutch woman experienced an embolic stroke after receiving a “love bite” on the left side of her neck, and a 44-year-old woman in New Zealand was hospitalized for a stroke after receiving a hickey in 2011. Gonzalez, however, is the first person to have died from a hickey.

To understand how a hickey could cause a stroke, you have to first understand what a hickey is. Aggressive kissing or sucking causes blood vessels, located beneath the surface of the skin, to break. These ruptures, created by the negative pressure from suction, allow blood to flow out beneath the skin, creating what we know as bruises. It takes five to ten minutes before the hickey is visible and is typically a little painful.

The location of a hickey determines its potential danger. The hickey on the New Zealand woman was directly above a major artery. The broken blood vessels dislodged a clot, which then traveled to the woman’s heart, inducing a minor stroke. She was treated with warfarin, an anticoagulant, and the clot disappeared within a week.

But don’t be too alarmed if getting hickeys is your thing. While death is a very real possibility, the likelihood of experiencing a stroke post-hickey is still very, very rare. That said, hickeys are considered the most common of all sex injuries. If you’re looking for a safer alternative, you could always try a technology-driven hook-up instead or read up on the scientific ways to make your partner squirm (in a good way). They’ll probably enjoy “benefit provisioning” more than hickeys, anyhow.