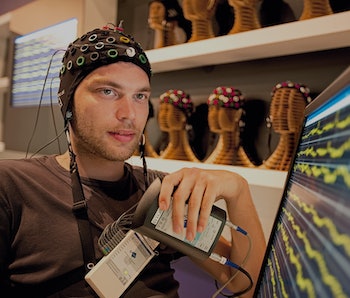 Sure, a haptic sex toy-facilitated romp with a long-distance lover might keep a relationship alive, but technology can create forms of intimacy beyond simulated sex. The most groundbreaking user interfaces developed over the next several decades will likely provide us with new opportunities to interact with each other in artificially immediate ways. Access to each other’s bodies may pale in comparison to access to each other’s memories, emotions, and experiences.

Is there anything more intimate than getting into someone’s head? Sure, mind reading could be intrusive to a fault — Kylo Ren’s use of the Force is borderline rapey — but relationships are all about making those deep mental connections with consent. And there are new technologies being developed that could soon make mental communication a lot easier. Take BrainGate, a system that can translate brain waves directly into actions without having to be translated through language or the body — mediums that, more often than not, just introduce noise. Could transmission of pure thought between partners be next?

The future of brain-based intimacy largely rests on the fact that sex is a mental exercise. Orgasms manifest in the brain through a release of oxytocin in the hypothalamus and the activation of the nucleus accumbens, the brain’s pleasure center. Rolling with this idea, futurist Scott O’Brien has suggested that we could someday stimulate those brain areas directly using neural-based headsets, producing orgasms without the burden of bodies. It isn’t a new idea — remember that infamously uncomfortable brain-sex session in Demolition Man? We’re getting closer to making than an uncomfortable reality.

A lot of work has gone into simulating sex, but little has been done about recreating the comforts of the afterglow. A device called Pillow Talk might be the first step: Through pulse-monitoring wristbands and pillow-embedded speakers, the device lets long-distance lovers fall asleep to the sound of their partner’s heartbeat. “By sharing something so intimate with each other,” as the project developers describe on their Kickstarter campaign page, “you can feel connected in a unique and special way.”

The Sounds of Love

A Japanese sound artist known as Rory Viner has attempted to recreate the sensation of sex aurally by turning bodies into instruments. By tracking his and his partner’s movements during sex using piezoelectric sensors then channeling the data through an interface that translated motion into music, he composed his coital opus, “Sex, Sensors, and Sound.” While it’s never really comfortable to hear the sounds of someone else’s lovemaking (though the 42,000 hits his experiment has racked up would suggest otherwise), creating — and replaying — those you make with your own partner could foster a new kind of art-based intimacy.

The autonomous sensory meridian response has turned into a YouTube phenomenon, thanks to the millions of viewers who tune in to intimate videos of people doing and saying mundane things — like folding towels or wiping glass — to trigger a pleasant tingling at the back of the head, scalp, or neck. The phenomenon isn’t well understood (or universally accepted as a scientific reality), but its effects are known as “brain orgasms” for a reason: It triggers a sense of pleasure that has little to do with physical sex and everything to do with hacking the brain. (Of course, this hasn’t stopped ASMR from making the controversial crossover into erotica, giving viewers a sensational double-whammy.)

More like this
Mind and Body
17 minutes ago
What scientists know — and don’t know — about the Langya virus
By Miriam Fauzia
Mind and Body
8.8.2022 12:30 PM
One type of walking reliably boosts fitness more than any other
By Lindsay Bottoms and The Conversation
Mind and Body
8.7.2022 7:00 PM
Repairing America’s underground infrastructure reveals an unsettled scientific debate
By Robin Lloyd and Undark
Share: