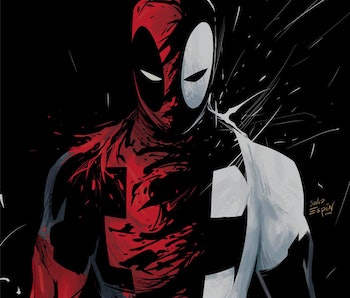 The fantasy mash-up Marvel fans have only dreamt about is coming on October 5. Yeah, we’re talking about Deadpool in the Venom suit.

In Deadpool: Back in Black, the fourth-wall-breaking merc with a mouth will bond with the alien symbiote — the same one that created Venom — in a limited series from writer Cullen Bunn and artist Salvador Espin. You gotta see the costume.

And it’s not the first time Deadpool and Venom have gotten freaky. 2015’s Deadpool’s Secret Secret Wars revealed that Deadpool bonded with the symbiote in 1984’s Secret Wars, even before Spider-Man had his first run in with the black parasitic slime. Bunn and Espin’s Back in Black will kick off when the symbiote rebounds to Wade Wilson after Spidey rejects it.

Comic Book Resources has some preview scans from Back in Black, which show Deadpool fighting an alien army. It looks like a completely chaotic book, which is exactly what we would expect when the Merc with the Mouth bonds with a substance that enhances aggression and physical skill.

Bunn and Espin, the creative team behind Back in Black are both Deadpool comic vets: Bunn wrote The Deadpool Killogy, and both he and Espin were on the entire run of Deadpool & The Mercs for Money this year. So it’s safe to assume these guys know what they’re doing.

And boy, do they. Just check out that suit.

Believe it or not, this isn’t the first time Deadpool and the symbiote got together, at least within official Marvel history. In 2011, a What If? one-shot from Rick Remender proposed an alternate reality where the symbiote bonded with Deadpool for good. That fusion was much more violent and less sleek than Bunn and Espin’s vision, with Deadpool becoming far more animalistic than enhanced.

It is, however, unlikely that these characters will ever cross over on screen. Deadpool is property to 20th Century Fox while Sony is moving forward with a Venom universe separate from the Marvel Cinematic Universe which now has Spider-Man.

Deadpool: Back in Black will hit comic shelves October 5.